A “Smart” Center for the Future Technology 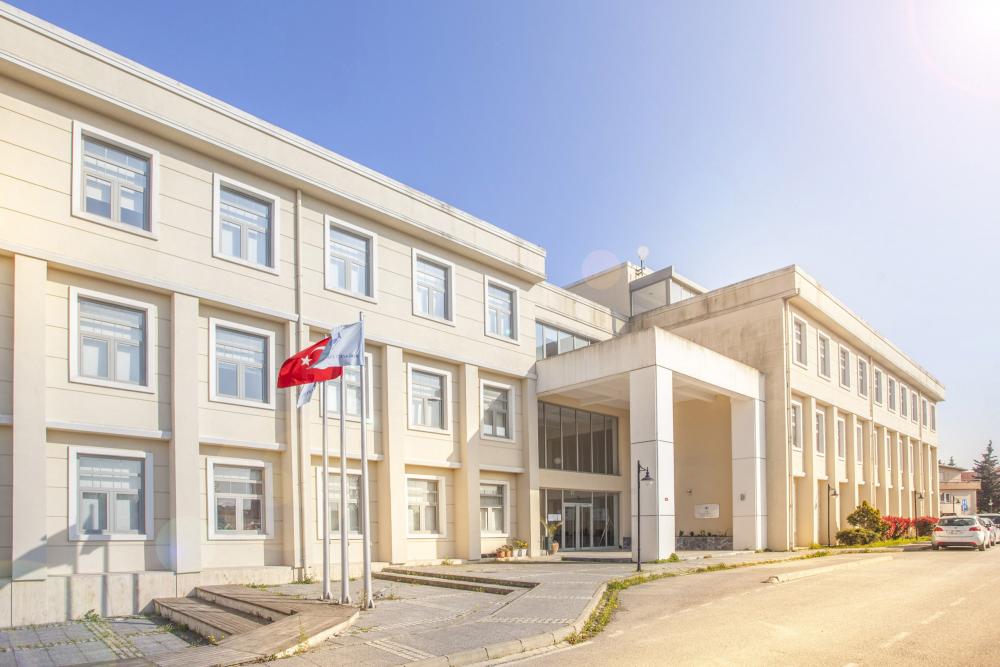 A “Smart” Center for the Future Technology

Boğaziçi University Kandilli Campus is witnessing infrastructure investments in order to turn it into a new research campus. Telecommunications and Informatics Technologies Research Center (TETAM), founded in the Kandilli Campus in 2013, is one of the main examples to this end. Built with the fund granted by the Ministry of Development, TETAM aims to provide the researchers working in the telecommunications and informatics fields with ample means and to transform the Kandilli Campus into an interdisciplinary research campus.

Upon the completion of the construction of both the dorm for graduate students and the new research center later this year, Boğaziçi University Kandilli Campus will become one of the leading research campuses in Turkey. We met with the director of TETAM, Prof. Dr. Lale Akarun, the successor of Prof. Dr. M. Ufuk Çağlayan, and with the teams of the projects being conducted at the center to talk about the provided means to the researchers and their projects. TETAM embraces such new technologies as the Internet of Things, Cloud/Fog Computing, and new notions such as “Maker Movement”.

The birth of a new research center

TETAM’s history dates back to 2007. TETAM started functioning with the name of Center for Researcher and Academician Development in Information and Telecommunications Technologies Project (TAM Project) within Boğaziçi University in 2007 and received financial support from State Planning Organization/Ministry of Development. TAM Project has been proposed by 26 faculty members from Boğaziçi University, under the leadership of Prof. Dr. Mehmet Ufuk Çağlayan, a professor of Computer Engineering, where 11 faculty members are from the Department of Computer Engineering, 11 from the Department of Electrical-Electronics Engineering, two from the Biomedical Engineering Institute and two from the Department of Molecular Biology and Genetics.  Organized under the framework of eight different interdisciplinary research fields, the project has expanded with the addition of 11 new faculty members.

In the meantime, thanks to the support of State Planning Organization and the fund of Ministry of Development, TETAM building construction was finalized and the doctorate and post-doctorate researchers conducting their studies in the center were awarded a scholarship.

TETAM accommodates many scholars from different units in various departments, such as Computer Engineering, Electrical and Electronics Engineering, Biomedical Engineering, Earthquake Research Institute, and Biology departments. As the research center pay a salary to the full-time researchers, the number of doctorate graduates from these departments have increased.

More researchers to come after the 320-person-dorm is built

TETAM is expected to move to another stage after the dorm is built for graduate students in Boğaziçi University Kandilli Campus. Vice Director Prof. Dr. Cem Ersoy reports “Upon the completion of the 320-person-dorm for graduate students in the Kandilli Campus, TETAM will provide the perfect atmosphere for the researchers. For the doctorate and post-doctorate students, time is of the essence. Having accommodation close to the facility will create a more productive atmosphere for them to study in.”

There are recreational spaces, kitchens and even showers for those that work long hours in the center. All of the offices have a standard design. The building is not only technologic, but also modular. It can be redesigned if need be. Cem Ersoy states “Sharing is both in the soul and the physical sense of TETAM. When someone needs something, he can use it. When he’s done with it, someone else can use it.”

Along with the social spaces in the center, there is also a meeting room that can hold approximately 100 people designed to cater to seminars or symposiums.

We talked to the project managers of different projects, especially “Smart Home”, being conducted in Boğaziçi University Telecommunications and Informatics Technologies Research Center.

One of the eight laboratories located on-site is designed for the Smart Home Control System Project. Required scenarios are acted out in the laboratory, which is sectioned and furnished as a house with a living room, kitchen, and bedroom. Coordinators of the project, Sinan Işık, a faculty member of the Department of Mathematics from Boğaziçi University, and Hüseyin Anıl Özmen, a master’s student of the Department of Computer Engineering, informed us about their project, smart home control system.

Hüseyin Anıl Özmen, emphasizing that the Internet of Things and Industry 4.0 will affect every aspect of our lives, summarized the popularization process of the Internet in our lives: “When the Internet started to become more popular in Turkey at the beginning of the 2000s, people would go online using machines. Then, with the next decade, mobile technologies entered our lives in the 2010s. When we’re approaching 2020s now, the age of Smart Objects has dawned. The applications used in not one specific industry but in all industries are now smart and connected to the Internet, and new devices are all around us.”

Özmen suggested that Smart Home Control System makes it possible to connect several devices together and turn different scenarios into reality and that this is done by making sure the electronic devices at home communicate with the modem. This allows people do vastly different things from seeing if there’s anyone home to controlling the room temperature and humidity as well as turning the air conditioner or the fridge on or off using a computer in light of the information they receive.

Hüseyin Anıl Özmen elaborated the project: “We have wireless sensors in the smart house in our lab. These sensors can measure humidity, temperature, and light level. We then gather the data from the sensors using minicomputers (Raspberry Pi), process it, and then turn on or off some of the devices in compliance with some rules. Sensors are passive devices, working only to transfer data. However, there are active things in the Internet of Things as well. We can control some of the on/off operations using micro-controllers over Wi-Fi.

The data is imported using these sensors. We then process it, activating the home systems when needed. Using the smart plug we’ve developed, we can control all these devices over the Internet. For example, if the temperature at home is too high and I want it to be cooler when I get there, I can turn the AC on with an instruction I generate using my computer.”

Sinan Işık also emphasized the importance of industrial support to the Internet of Things (IoT) projects: “We can turn the electrical devices on and off in this project that we’re conducting. If more funding can be obtained, we’ll be able to not only turn the devices on/off but also fully and remotely control them. For example, we will be able to control the temperature of an AC unit. The support of the industry is very important to achieve this. The ideal project would be this. Our purpose is to create an algorithm that will assess the data from the sensors and activate the devices. This will allow us to control the smart devices and the smart homes with smart devices.”

Işık and Özmen remarked that Internet of Things (IoT) will allow many new technologies to enter our lives and that it’ll be possible to build a system that spreads from houses to cities in the future: “Using smart plugs, we can measure how much energy we use around the house and detect if anything is broken. We can include other elements in this system as well. The crucial part here is to create the algorithms and applications that can be used to build smart mechanisms. You can think of our work in this project as an infrastructure, a foundation to apply to all these other scenarios. We’re testing this foundation in our smart home laboratory. The system we’re developing also conforms to the developments of Industry 4.0.”

Another laboratory in TETAM is “Maker Movement”. This lab is designed to create projects that can pave the way for important technological advancement.

Suzan Üsküdarlı, a faculty member of the Department of Computer Engineering, explained the work conducted in the lab: “Maker movement is a space that is shared by tech-savvy people with a high sense of sharing culture to create playgrounds where they can learn so much while playing games and where people teach each other countless things about their interests. This term was coined recently by the new generation living with the technology.

The most important principle in the maker movement is that everything is “open”. Sharing is the main principle here. We’re witnessing a switch from open software systems to open hardware systems. People are sharing new, very well designed but very expensive devices with each other and save money. This allows the new generation to have a tremendous amount of information and knowledge.”

Stating that another purpose of TETAM is to cement the cooperation between universities and the industry, Suzan Üsküdarlı explained that they’re taking part in a European Union Project titled “Open Maker”. Üsküdarlı expressed that they’re working with Assistant Prof. Taylan Cemgil and his students from Boğaziçi University Department of Computer Engineering and added:

“We’re trying to build a bridge between the traditional producers and the Maker Community because they often do not possess the knowledge the Maker Movement participants do. On the other hand, Maker Movement participants don’t have enough knowledge about traditional marketing or different strategies. We’re aiming to put these two groups together to work with this “Open Maker” project. We’re trying to build a new economic model by uniting the two cultures. There are 10 pilot regions, Turkey is the fifth among them. And Boğaziçi University is the only Turkish university to take part in the “Open Maker” project.”

The research lab in TETAM is not only available to graduate students but also to the undergrads. Undergrad students can also work on their projects there. Two of the projects being conducted at the Maker Lab are gloves that can control computers and a computer software that can perform a smart search on a scientific article database.

Both these projects are conducted by undergrad students from Boğaziçi. Mahmut Karaca, a third-year student from the Department of Computer Engineering is conducting the “Computers Controlled by Gloves” project. He stated that the gloves can be used for various purposes: “These gloves can be used for training purposes or to control drones. When the project is advanced a bit more, it can be used to create artistic illustrations or to help the visually impaired with their daily struggles. The main purpose here is to control a computer. Once we code the algorithm that can control a computer, we can adapt it to other scenarios with various needs.”

Yet another project being developed at the Maker Lab is aiming to scan the scientific article database to search for published Neuroscience articles in order to compare different papers and measure the true contribution of such papers to the literature.

One of the contributors to the project, a student from the Department of Computer Engineering at Boğaziçi University, Şahin Batmaz, stated that conducting such a research would normally take about six weeks whereas it takes a few seconds thanks to the project they’re working on. The project, already making use of the databases of Scientific American Library and PubMed on the fields of medicine and psychology, can be adapted to search articles from other disciplines as well.