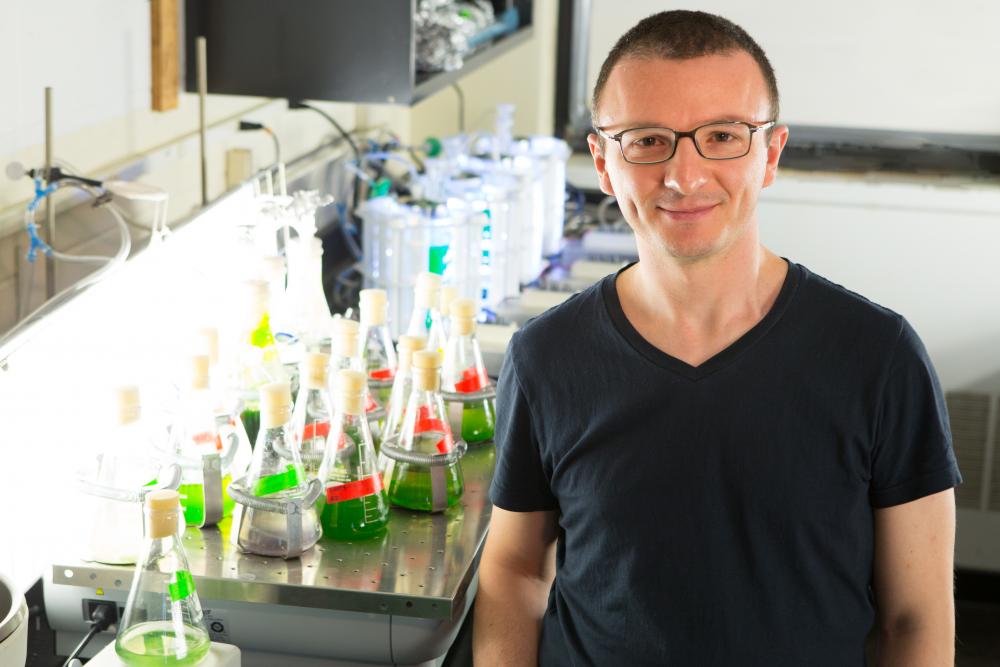 Boğaziçi University is continuing to work at full speed on a green and sustainable future. İstanbul Microalgae Biotechnologies Research and Development Center (İMBİYOTAB), which began working in 2017 in the Sarıtepe Campus, is now building the first carbon negative biorefinery of Europe to do studies on algae. The project titled "Integrated Biorefinery Concept for Bio-economy Driven Development" and led by Dr. Berat Haznedaroğlu from the Institute of Environmental Sciences of Boğaziçi University is also backed by the Competitive Sectors Program, which is designed to balance the regional differences across Turkey and promote economic development, and coordinated by the Ministry of Industry and Technology, the Directorate General for European Union and Foreign Affairs, and EU Financial Programs Department. İMBİYOTAB also signed a cooperation agreement with Turkish Airlines to produce domestic bio-jet fuel.

The continually rising importance of the need for a sustainable future across the world led to an increase in the number of studies focused on algae, which has a high potential for realizing such a future. Algae play a big role in battling climate change by reducing the amount of carbon dioxide emissions as they capture more carbon dioxide than other plant types. Biofuels, produced by using the carbon dioxide captured by the algae, are clean and eco-friendly alternatives to polluting fossil fuels. Recent studies in the literature show that the bio-jet fuel produced using algae can reduce the greenhouse gas emissions by 76 percent. Biorefineries allow a production of not only bio-fuel but also other value-added items such as dietary supplements or bio-fertilizer. This, in turn, allows biorefineries to stand as a more sustainable alternative to petrol-focused economies.

The main aim of the INDEPENDENT project (Integrated Biorefinery Concept for Bio-economy Driven Development), coordinated by Berat Haznedaroğlu from Boğaziçi University, is to produce items and technologies, based on the bio-economic growth model, using algae-based natural substances without fossil sources. It is expected from this model to substantially close the gap in the current account deficit in the health and economy industries. When the project is put into practice, the algae production capacity of İMBİYOTAB in Boğaziçi University's Sarıtepe Campus, an already self-sufficient campus in terms of electricity by the use of windmills, will be increased and the first and only negative carbon integrated biorefinery of both Turkey and Europe will be installed.

The refinery will start working at full capacity at the beginning of 2019 with a zero-waste policy. Being the first refinery across the world to have this much diversity in its product range in industrial scale, it will be the largest algae processing plant in Turkey as well as being able to work all year round. Its current processing capacity of 3.5-tonne for wet biomass will be increased to 110 tons and it will be able to produce 2400 tons of dry algae per year. It is planned to manufacture 13 different biotechnological products in the micro and macro algae production reactors built in the sea or on lands, such as human food supplements, pharmaceutical components, animal feed, organic fertilizer, and biofuels.

Known as one of the most efficient groups among the creatures that use photosynthesis, the algae prove to be the best in terms of efficiency among the plants which can be used to produce fuel. They can be the most efficient renewable biomass source depending on the production system (e.g. capturing carbon dioxide). They can adapt to a vast amount of climates and thrive in fresh, salt or brackish water sources. There is an algae biorefinery in the US, producing biodiesel and several others in Europe that produce bioethanol using different cellulosic sources. Turkey has a high algae production potential due to its mild climate and frequent clear, sunny days.

A cooperation agreement regarding the production of bio-jet fuel between İMBİYOTAB and Turkish Airlines has recently been signed and the fuel will be tested in Turkish Airlines aircrafts when it is ready. The civil aviation industry is responsible for 2 percent of the current global carbon dioxide emissions. However, it is possible to lower this rate to 2015 levels, 1.5 percent, if renewable sources such as bio-jet fuel are used. Microalgae-based bio-jet fuel seems to be the most viable option to achieve this goal, considering such criteria as fuel quality and efficiency.

The biorefinery will not only produce bio-jet fuel but also bio-hydrogen and bio-diesel. Biodiesel production from algae has been studied for a long time now to reduce costs in the energy industry in the world. In Turkey, only 3 percent of the gasoline used today is bioethanol and 5 percent of diesel is biodiesel while these rates are 85 percent for ethanol in the United States, and 20 percent for diesel. To increase these rates, Turkey needs to start growing local energy plants instead of using imported seeds. If local seeds can be used in the industry, the current blending rate of 5 per mille will be increased to 2 percent. Thanks to this new refinery to be built in Boğaziçi University, about 30 tons of biofuel will be produced per year in Turkey in the near future, which will allow Turkey to compete with other countries in terms of biofuel in the long run.

Turkey's foreign dependency will also subside over time as the biorefinery project led by Dr. Berat Haznedaroğlu from Institute of Environmental Sciences of Boğaziçi University gain popularity across the country. Petroleum is a non-renewable, polluting energy source that is also one of the main reasons for climate change. Turkey imports 85 percent of its petroleum need from neighboring countries. Following the introduction of domestic bio-diesel and bio-jet fuel to Turkey, its foreign dependency on petroleum products and petroleum itself will subside. Moreover, the refinery will also fulfill the need for organic bio-fertilizers and animal feed, which will decrease Turkey's import dependency.