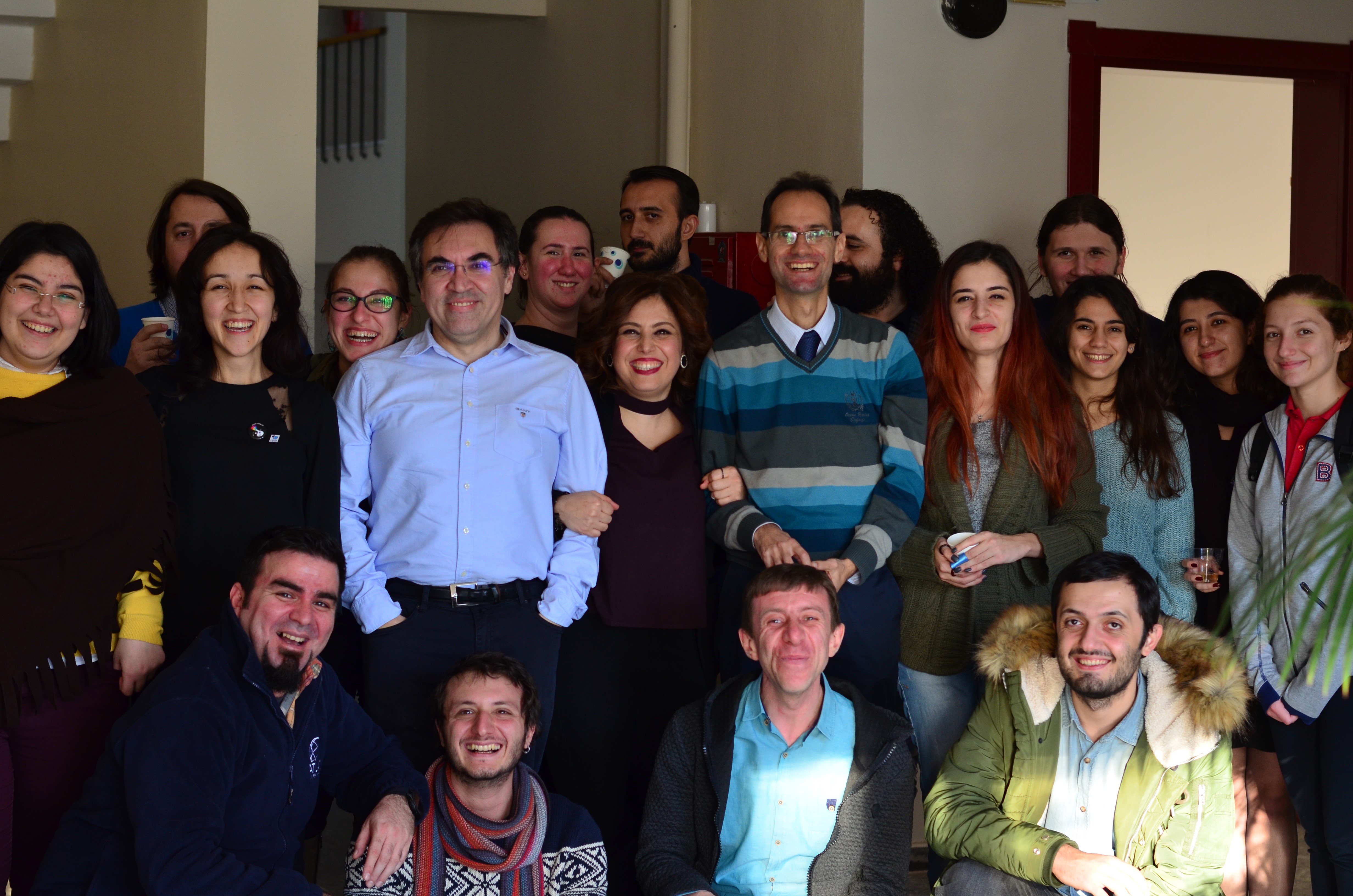 Kandilli Detector, Accelerator, and Instrumentation Laboratory (KAHVE Lab) opened on Kandilli Campus after over a year of work, with the objective of replacing some of the detectors currently used in CERN’s ATLAS experiment in the year 2020.  In the KAHVE Lab, experts on particle physics and accelerators are also working together to produce locally particle accelerators that can meet the needs of various sectors of Turkish economy.  The team produces the materials used in the experiments in the lab’s workshop and conduct data analyses on computers brought from CERN, using a system they have developed.  Professor Erkcan Özcan of Boğaziçi University Physics Department and his team explained to us their work in the lab.

Özcan stated that Turkey should become a producer of accelerator technology – a technology that is used in a wide variety of areas, from medical imaging practices in the healthcare sector to the cable industry. He added that a detector used at CERN to measure particle clusters was first manufactured, at CERN standards, in this lab in Turkey.  Based on the experience they have accumulated during the course of that work, the team will build a new detector, which will be tested by the accelerators they have developed; the new detector will be used at CERN in the year 2024.

Prof. Özcan pointed out that some of the scientists working at Kandilli Detector, Accelerator, and Instrumentation Laboratory have participated in the ATLAS experiment at CERN, representing BU.  The objective of their work is to contribute to scientific research, but also to develop local industry through the projects they are presently working on.

Prof. Özcan stated that one of their objectives was to produce not only technology, but also science.  Many of the researchers at the KAHVE Lab have also participated in CERN experiments; they are presently building a prototype detector and will manufacture its bigger version for CERN in the coming years.

“Our group here comprises mostly scientists who have had CERN experience; many of our Master’s and Doctoral Students are currently working in ATLAS or other CERN experiments. In the year 2020, a significant amount of renovation work will be initiated at CERN. The detectors in the two experiments in which Boğaziçi University is involved will be replaced at a major cost. We would like Turkey to be able to build some of those detectors from 2020 onward.  In this context, the knowledge and experience we have accumulated since the 1990’s has enabled us to specialize even more.  For instance, Saime Sarıkaya Gürbüz, PhD student and research assistant at BU Physics Department, learned the technical details of the “gaseous wire chambers”, a kind of particle tracking detector, during the 8 months she worked at CERN.  Upon her return to Turkey, our team successfully built such a detector with support from TUBİTAK.”

Explaining that the detector they built functioned at CERN standards, Professor Özcan said, “The first “wire chamber” (with an active area of 100cm2) that we have designed and built here is a much smaller version of the detector we are planning to build for CERN.  Its small size has enabled us to carry it to CERN to conduct tests and during those tests we observed that the signals of our wire chamber were higher than its equivalents at CERN.  You need to have detailed measurements to be able to answer questions such as the following: how efficient are the particle tracking detectors in finding the particles? Or, when they find the particles, at what sensitivity level can they identify the real positions of these particles? You either use particles from space for measurement, or if you need very sensitive calibrations, then you build a device that can produce high-velocity particles.  That is the device we call a “particle accelerator”.  We aim to set up an electron accelerator in our lab and conduct tests of the detectors we want to build for CERN here in Turkey.  And as accelerators have a very wide range of use, we will be contributing to Turkey’s economy as well.”

The small electron emitter that the team built in the lab, with help from Dr. Hakan Çetinkaya, a visiting academician from Dumlupınar University, is in fact the initial stage of an electron accelerator running on low energy.  The performance of the accelerator is expected to increase once work is completed.  It is of importance that all parts of the accelerator have been locally produced in Turkey.

Turkey has a large industry, but in technology we are dependent on foreign countries; it’s time we moved to technology production in Turkey

Prof. Erkcan Özcan explained to us that Turkish industry was well behind in accelerator technology, which is used in many areas in everyday life.

“Our objective is to accelerate subatomic particles like electrons and protons to very high velocity, up to a considerable fraction of the speed of light and then collide them with fixed targets or with each other to produce devices as well as science. That is the aim of this laboratory.  Accelerator technology is being used extensively all over the world whereas in Turkey, with the exception of a small number of applications purchased as a package from abroad, this technology does not exist. Actually, we use the products of this technology in every part of our lives, but we do not produce the technology.

For example, let’s say you have had a tomography or X ray taken at a hospital.  These processes and many others like them utilize small accelerators.  We break the bonding of electrons, accelerate them, and when they collide with a metal target, they produce X-rays. Or, let’s say gamma rays are produced when higher velocity electrons collide; in radiotherapy, these gamma rays are directed on tumors to treat cancer patients.  All such devices are imported, ready to use: each of them is a closed-book for our country. When an imported product breaks down, or needs repairs, every single needed part will also be imported from abroad.

Here is another example, one from the cable industry. Turkey’s cable industry is quite strong, with annual exports amounting to $2 to 2.5 million; it is the biggest part of our electrical machinery exports.  As we all know, a cable has conductors inside, and the sheath is made of a polymer material, an insulator, so as to prevent electric shocks.   When the cable heats up, the polymer material may melt and cause a fire.  To make it fire-proof, the polymer needs to go through a process we call “polymer cross-linking”.  Turkish fırms use furnaces for this process: at a certain temperature, polymer becomes fire-proof and more durable.  In Europe, however, the process of cross-linking involves passing groups of electrons over the cable – the result is higher quality products.  One of our objectives is to produce in Turkey the electron accelerators this process requires. Think about it: we have an industry with a massive export volume, but we do not have the basic accelerator technology that will increase its competitiveness in the market.

There are accelerators in every part of our lives; let me just give one final example.  Oxygen welding is very commonly used to weld metals in the automotive industry, or the machinery parts industry in general. Actually, there is a more sensitive and durable alternative to the process of oxygen welding; namely, electron beam welding.  Electron beam welding is used particularly in welding highly sensitive pieces, or metals with different melting points, like the parts of an airplane engine. Unfortunately, its use in Turkey is very limited; so, to increase its use in the local industry, we are working on building a prototype electron welding machine, using our own means and resources.”

Boğaziçi has been actively involved in CERN since the 1990’s

Professor Özcan stated that KAHVE Lab would continue to contribute to the experiments conducted at CERN; he pointed out that scientists from Boğaziçi University had left their mark on many outstanding studies at CERN:

“We have a vision, from the perspective of Boğaziçi University: our contribution to accelerator and detector technologies in Turkey are part of this vision.  Then there is also another vision, from the perspective of the world.  The Large Hadron Collider (LHC) at CERN is still active, and will remain functional until 2035.  So we will acquire and analyze more data.  Possibly, new particles will be discovered, like the Higgs particle that brought the Nobel Prize in Physics in 2013.

Let me try to explain this with an analogy:

We, as humans, built a huge ship named “LHC” to explore oceans as yet unknown; we launched the ship in the early 2010’s and set sail. From the very start of our journey, we knew that we would discover a continent because the data at hand proved the world is round.  Indeed, after a while we discovered that continent:  the Higgs particle.  But there is still another entire ocean waiting to be discovered.  We are mapping the ocean as we advance, continuously providing science with new data.  And if we ever discover a piece of land that we never knew of, that will be a tremendous achievement and most probably bring another Nobel Prize.  On the other hand, let’s say we roamed the oceans until 2035 but did not discover anything: then we would need a better vessel.  Plans for that are currently being discussed in Europe, in America and in Japan.

Ever since Engin Arık participated in the ATLAS experiment in the 1990’s and Erhan Gülmez took part in the CMSD experiment in later years, Boğaziçi University has had a part in the early research and initial designs of the ship named LHC.  Some of our alumni who were students in those years have assumed increasingly more important jobs on board this ship through the years. One of them is Gökhan Ünel from the University of California Irvine, who never stopped supporting our work.  He has been instrumental in ensuring that the voyage continues; he has always had an active role in the operations of the ship and in mapping work; he is seeking new particles in the analyses of the collected data. The research we have been conducting in this lab will enable us to be actively involved in the renewal of that ship so as it can sail to more distant, rougher oceans.”

They produce materials at the workshop in KAHVE Lab

KAHVE Lab occupies three floors of the Feza Gürsey Building on Kandilli Campus.  The first floor houses the machine shop where the team designs and produces mechanical parts for use in the experiments; thus, they themselves direct and control all processes, from design and production of parts to circuit electronics and data acquisition.  Cihan Çiçek, A Master’s Degree student at the Physics Department, describes the work carried out in the machine shop:

“We have the parts manufactured in the small industry, and then shape every piece in accordance with our requirements, using the machinery in our own workshop.  We are in constant interaction with technicians, particularly those in the Bayrampaşa industrial zone.  There they manufacture some of the materials we have designed.  Here in the lab, we both manufacture some of the small parts, and change or reshape the details of industrially produced parts in line with our needs.”

Accelerators and detectors are located on the second floor of the laboratory.  On the third floor are the computers used for simulations for experiments and data analyses.  The seven computers here have been brought from CERN; an additional 40 new computers are expected this year.