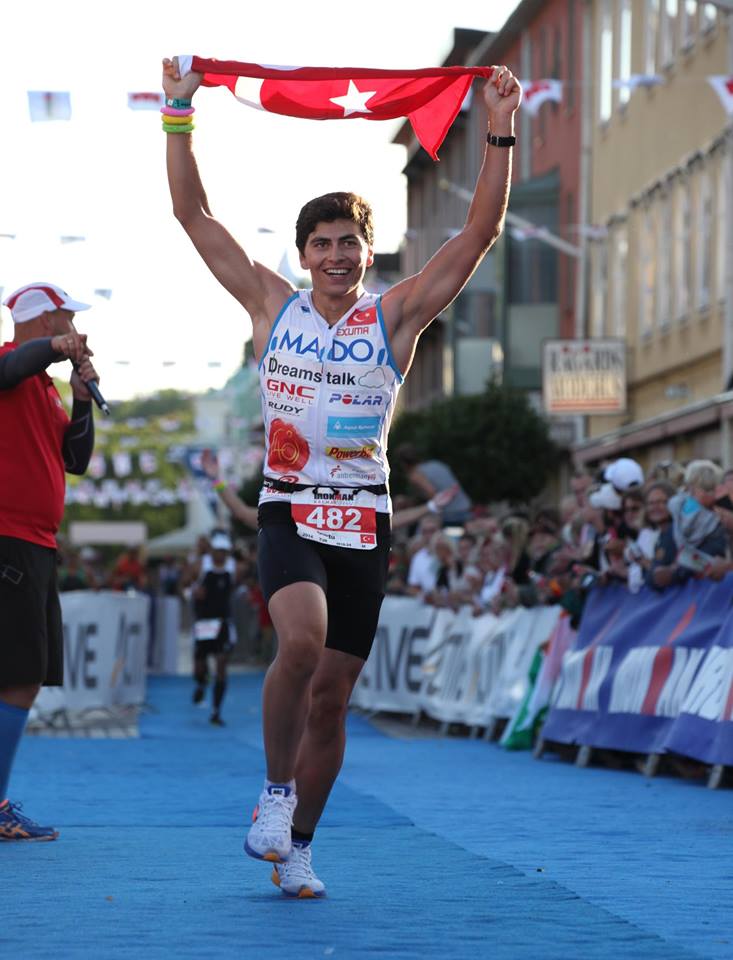 We talked to Göktuğ Kıral, a Boğaziçi University student and “Turkey’s youngest Ironman” about how he earned this title and the journey he took afterwards.

Göktuğ Kıral, or Göktuğ ‘Kral’ as he prefers to spell his last name (the Turkish word for King) is a senior student in the Management Department, a successful athlete and an adventurer and traveler. He heard about the Ironman triathlon from the coach of the university’s rowing team. After he decided to participate in the triathlon and started training for it, he also began to hear one particular comment very often: “You can do it, but it’s a difficult race, you know!”  Yet in 2014, he successfully completed this very difficult race and earned the title “Turkey’s youngest Ironman”.  Then, to make up for the year of training when he barely ventured outside Istanbul, he did what many people dream of:  he traveled around the world.  He travelled to Europe first and then to Asia, supported all the way by his sponsors.  He also wrote about his adventures during his travels and set up a blog offering travel tips.

We talked with Göktuğ Kıral about his training for the race, the race itself, looking for sponsors, his adventures in Asia, and his blog.

How did you hear about the Ironman triathlon, and how did you prepare for it?

I joined the rowing team in my first year at BU.  I first heard of Ironman from my trainer:  you swim 4 km, cycle 180 km and run 42 km, all in one day.  I first thought, “Can there really be a race like that?  That’s impossible!”  Then I investigated it and set my mind to it.  I occasionally wavered, of course, because although I was interested in fitness before I started university, I had never had any experience in performance sports. Therefore, when I started training for the triathlon, I focused on running.  In 2013, one of my teammates finished the Ironman triathlon in Sweden.  That made me consider setting an earlier date to participate in the race because then I would have a chance to become “Turkey’s youngest Ironman”.  Of course it was not an easy process in any sense; for example, even the registration fee was €600.  I also had to find sponsors, so while I continued my training, I was also busy looking for sponsors.  I seriously prepared for this race for a whole year.  I didn’t have a trainer; I did my research on the Internet.  Actually the Internet has some very valuable resources on Ironman — forums, websites, etc. I worked out at Boğaziçi University’s sports facilities at the Hisar Campus; I ran on the tartan track at the Uçaksavar Campus; I went out of the campus for cycling practice and cycled between Bebek and Sarıyer.  You don’t work the same way every week; as the day of the race approaches, you train harder.  A month before the race, you do the maximum you can.  I would train 20-22 hours a week.

How did that go together with your classes?  Did your training affect your academic performance?

My first goal was the Ironman triathlon; training for it came before anything else.  But I also thought it should not impede my studies and I seriously studied hard.  Actually, that year my grades were higher than the year before; training hard gave me the motivation to study harder.

You mentioned the process of looking for sponsors during the time you were in training.  For which needs or expenses did you need a sponsor?  What kind of responses did you receive, and who sponsored you?

I first applied to the University, of course, and I was given unlimited free access to the University’s sports facilities: I could use the swimming pool and the fitness center free of charge.  In addition, they covered my registration and travel expenses.  I needed other things, too. For instance, I had to buy a bicycle; that was the biggest expenditure.  I also needed a wet suit, running shoes, and a pulse monitoring watch.  I worked very hard for each one of them.  For instance, I had sent over 1,000 e-mails with regard to the Ironman triathlon.  I had called 100-200 companies, which means I must have made 200-300 phone calls.

Do companies have funds allocated for such sponsorships?  And also, based on your research, can you tell us how the concept of sponsorship in Turkey differs from practices abroad?

There is more support for sports abroad, there are more opportunities.  But I had an advantage:  when I started preparing for Ironman and began looking for sponsors, Ironman was just becoming popular.  It was not very well known, so people were impressed.  That facilitated my search in a way.  Besides, the project was exciting. It might be more difficult to find sponsors abroad because many people in those countries train for Ironman or other triathlons.  I think you need to exhibit extraordinary performance to find sponsors abroad.

What kind of responses did you get from your friends and family before and after the race?

At first no one believed I could do it – neither my parents nor my brother or my friends.  Even my rowing teammates doubted me:  “You can do it, but it’s a difficult race, you know,” they would say.  Of course a lot changed after the race.  Then people would say, “Hey, Ironman’s here...”

You started a travel blog after the Ironman triathlon.  How did that happen?  Where did you travel?

After Ironman, I was really overwhelmed.  I had not travelled at all for a whole year so as not to interrupt my training schedule — not even in Turkey.  My daily routine was from home to school, back home and then to training.  I made a plan then:  I planned a journey—similar to Interrail trips in a way, but a journey where I would feel freer. And I set off.  While waiting for my flight to Paris at Barcelona airport one day, I met two people.  We talked a lot about travelling and the common sentiment during the conversation was, “We’ve been in Europe; we have seen many places here.  The next thing to do is to go to Asia or Africa.”  It was like the Ironman idea.  I said, “I will do it one day”, but did not set a specific target.  Then I came back from Europe, classes began, and towards the middle of winter I started thinking that I had to do something similar to Ironman that summer, but it should be a little different, and more difficult.  Then I thought I could go to Asia and travel from one end of Asia to the other: “Around Asia in 80 days”!  I defined my itinerary then:  India, Nepal, Bangladesh, Myanmar, Vietnam, Cambodia, Thailand, Malaysia, Singapore, and Indonesia.

I know that this was not the route you planned in the beginning; your itinerary changed when an e-commerce platform accepted becoming your sponsor and the number of countries went up to 11.  How did that sponsorship come about?

Actually, to get sponsorship for this journey, I wrote projects for 5 or 6 different brands. I designed projects connecting the product of each brand with my journey.  Two of them accepted the projects I had prepared for them. When I finalized an agreement with the e-commerce platform that you mentioned, I revised my itinerary.  Originally the plan was to go from India to Vietnam; Malaysia, Singapore and Indonesia were not on my itinerary, and neither was Qatar.  My sponsor suggested “11 countries, 11 adventures”.  Then I added Qatar because a Qatar-based airline company sponsored my flights.  And when I had to change planes in Qatar, I decided to stay a few days and visit the country. Qatar is a very beautiful country.

How did you prepare your projects?  How much time and effort when into it?

I began writing projects for several brands in January.  Until March I worked on the theme and a rough plan of the journey, and made a list of 500-600 brand names.  I assessed those brands one by one and shortlisted those that were likely to accept sponsoring my journey.  Then I investigated their products and the services they provided, trying to find ways I could make use of those products or services during my journey.  I had to make changes in the structure and itinerary of the journey to suit each brand I targeted.  These were all useful steps, even if I did not do anything for that brand.

What is the most interesting thing that happened during your trip through Asia?

I bought a motorcycle in Vietnam.  I was planning to travel by motorcycle from Hanoi in the North to Ho Chi Minh in the South.  One day I parked my bike in front of a hotel in Hanoi, and went into the hostel next door for a few minutes to post a notice.  When I came out, my bike was not there.  I went into the hotel and politely asked the receptionist if he had seen my bike. To my surprise, he flew at me, and a fight broke out.  I was focusing on defending myself rather than hitting him because in a place like Vietnam, if you attack or hurt someone, the likelihood of your going to jail is quite high.  I fought defensively, but I did get in a punch or two!

That sounds like our “Irish tourist” story.  How did the shopkeepers and people on the street react to what was happening?  Did they intervene?

No, no one intervened.  The fight spilled out onto the street, exactly like in the Irish tourist case; people outside didn’t attack me but they didn’t’ do anything to stop the fight either.  The fight and the subsequent arguments went on for 5 or 10 minutes in the street, and I left before anything serious happened.  Meanwhile, I noticed that they had parked my motorcycle across the street – apparently it wasn’t stolen.

Among the countries you visited, which is your favorite country?

Indonesia is my favorite.  Indonesians are very polite and friendly; they are kind, sincere people.  Besides, there’s a lot to do in Indonesia.  I went to Bali, for instance, and they have the best beaches in Asia. I had a chance to go surfing — I like to surf.  Also, both Bali and Indonesia are culturally very rich. It’s a place where Islam, Hinduism, and Buddhism coexist in harmony.  The influence of Hinduism is quite visible, particularly in Bali.  They also have amazing temples.

How did the blog come about?  Is it still going on?

Actually I couldn’t work on the blog much while I traveled—partly because I was too busy, and also because of problems like finding an Internet connection, etc.  Now I am working on a blog focusing on videos rather than writing.  I have made 5 or 6 videos already and posted them on YouTube.  These days I am tired of blogs based on writing because everyone writes and basically what they write is almost the same.  In an area like travel, the focus should be on the visual, I think.  I carried my GoPro camera with me wherever I went, and I also had my telephone; so I recorded a lot of material for my blog, and I am sharing all of that.