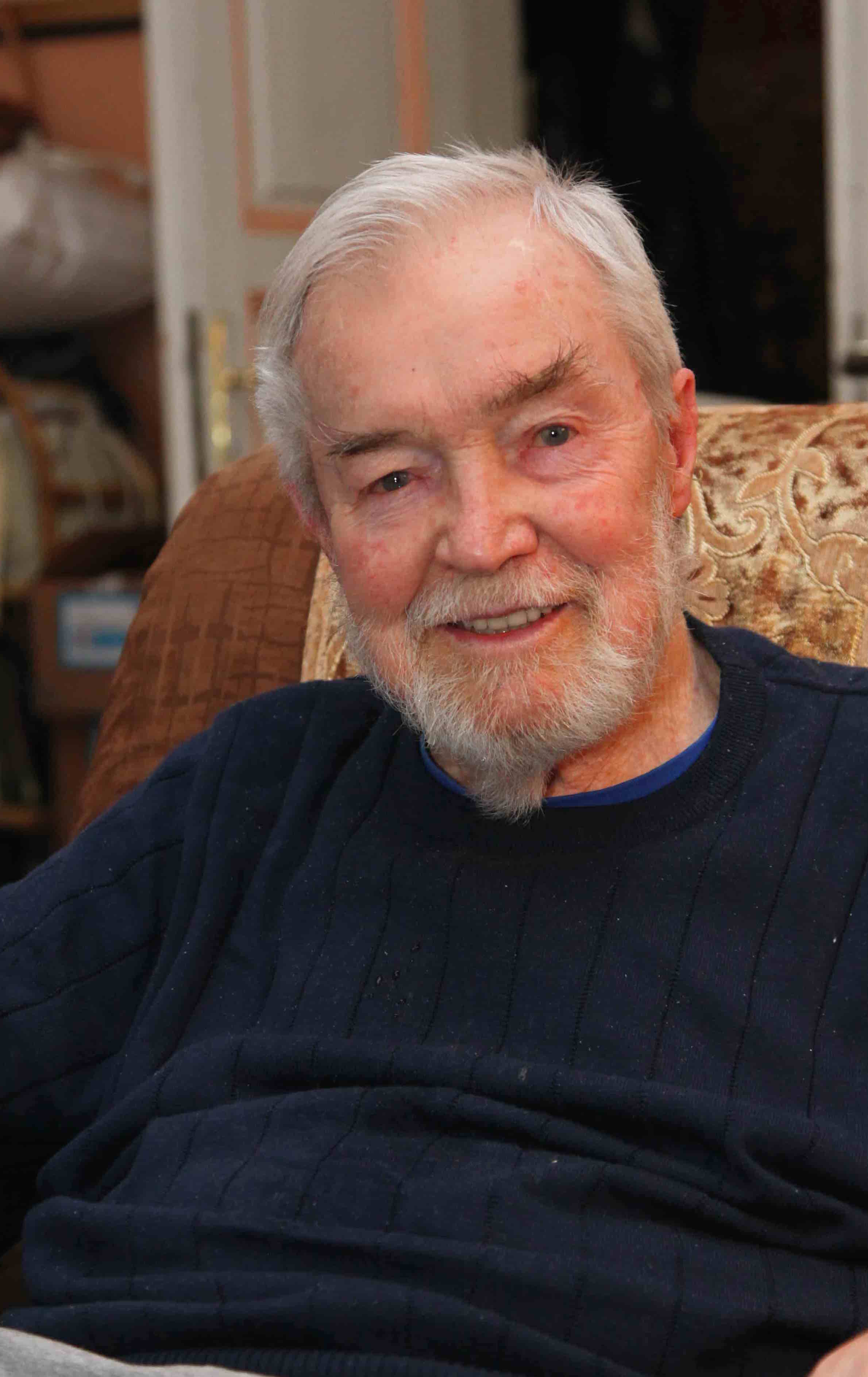 The living memory bank of BU, 89-year-old John Freely’s energy is as young as he was when he first arrived in Istanbul 55 years ago.  Prof. Freely, who started teaching at Robert College in 1960, has been a close witness of the years leading to the establishment of Boğaziçi University.  Freely is a genuine Istanbul lover and a humanitarian who can easily strike up friendships with people from all social backgrounds. With his inquisitive mind and never ending passion for learning, he is still productive.  His is the story of a life lived to the fullest, a life’s journey that extends to Istanbul after many years spent in different cities of the world from New York, to Burma, to Princeton. He lived in poverty as a child, witnessed wars and transformations around the world and       started afresh in Istanbul in the 1960’s, not yet a heap of concrete in those years, formed close friendships with Yaşar Kemal, Aliye Berger, Ömer Uluç and many others who are not among us anymore…

We are with John Freely to talk about his memories of the past and present of Boğaziçi University – a history of over 150 years starting with Robert College.

We last got together with John Freely, a man defying time with his brilliant mind, three years ago in this elegant villa whose walls are covered with the paintings of his wife Dolores. We introduce ourselves and remind him of our previous meeting.  He says, “You already know the story of my life, so there is no need to go over it again, is there?” Is it ever possible to be indifferent to the story of a living legend’s life?

The Story of an Extraordinary Life

Freely is born in New York in 1926. His father works as a grave digger and tram driver and his mother, who loves reading novels, is a cleaning lady. When his father becomes unemployed, his mother takes him to Ireland, her homeland.  Not many people are literate in those years, but his grandmother is. His maternal great grandfather brings home a book about Istanbul when he returns from the Crimean War. That book, which Freely reads at a very young age, forms his first impression of Istanbul.

Freely quits high school and joins the US navy and serves with a commando unit in China and Burma during WWII. At the end of the war he doesn’t have even a high school diploma, but he takes a special exam and is admitted to university.  During his post-doctoral studies at Oxford University, he develops an interest in Medieval Europe’s world of science.  In his new adventure as a new academician, he adopts this principle: “Science has evolved in a continuous cycle since the dark ages, thanks to Copernicus, Galileo and Newton”.

After receiving his PhD, he takes up teaching at Princeton.  Following the advice of a friend from Princeton, he comes to Istanbul and starts teaching physics at Robert College.  In the 1970’s he witnesses the establishment process of Boğaziçi University, and starts teaching there.  In the 1980’s he leaves Istanbul and after living in various cities around the world, he comes back to Istanbul with his wife and three children to settle down and never leaves the city again.

Our talk follows a natural course, stretching from his childhood to the university and to the people he has got to know in Istanbul, and covers a variety of subjects.  He has known such extraordinary people and accumulated such unique memories...  When he speaks of the friends he has lost, he says, “They have become ghosts now”.

“I am a peasant from a poor family.  That is why I have always felt at ease with people on the street.  I have never got along well with intellectuals.  My best friends in Istanbul have been taxi drivers.  Do you know Şevket Derviş?  He was born in Hisarüstü and he is a very good photographer. He is still a taxi driver and one of my best friends.” Then he reminds us of Karıncaezmez Şevki and tells us about their friendship.  Şevki was given this nickname (meaning a very kind person who wouldn’t hurt even an ant) because he hadn’t been involved in a single accident during the long years he worked as a bus driver for IETT (Istanbul Electricity, Tramway and Tunnel General Directorate). Widely known by his colorful personality, Şevki was also the legendary cheer leader of the Galatasaray football team in the 1960’s.

How Did He Meet Yaşar Kemal?

One of the best stories John Freely told us is about his extraordinary meeting with Yaşar Kemal, the pillar of Turkish literature, whom we lost recently.  He met Yaşar Kemal at a house party given by Cevat Çapa, a poet and interpreter and also a Robert College graduate.  “He was a big, imposing man,” Freely says.  “Of course I was young then and my beard was not white like this; it was red.  Yaşar Kemal was pointing at me.  Then he came over and pulled at my beard jokingly, and I pretended to hit him on the chest.  This is how we met and became good friends”.

We talked about Freely’s book titled “A Bridge of Culture: Robert College/Boğaziçi University: How an American College Became a Turkish University”, which is one of the most comprehensive books on BU’s historical heritage to date.

Freely says that besides being one of the institutions offering the best educational programs in the world, BU is also the bearer of the cultural heritage of Robert College traditions.  He tells us that during the first years, Robert College hosted students from more than 60 countries and from various cities in Turkey, and the faculty was comprised of instructors with doctorate degrees from American universities.  He says that the outstanding student profile and the presence of a variety of cultures, ethnic backgrounds and beliefs formed a unique way of life in Boğaziçi University.

“When I first came here, there were very few female students. By 1964 their numbers had grown. I was in my thirties, so the age difference between me and my students was not very big. I met with the graduates of 1964 recently; they are now in their seventies.”

“I’ve Had Students from Many Different Social Backgrounds”

“When I came to Robert College, something caught my attention. Children from poor families from various parts of Turkey had come to Robert College. We had students whose fathers were lawyers or doctors, but also “dolmuş” drivers or shepherds. You know that my father was a grave digger.  Poor students were always more intelligent because they had to study harder than the others.”

“The founder of Robert College, Cyrus Hamlin, was also from a poor family. He was a professional teacher, not a missionary.  His goal was to enlighten children.  The curriculum at Robert College was the same as that in Harvard University. We had physics, chemistry, biology and humanities classes.  There were many Greek, Armenian, Jewish, Russian and Bulgarian students at the school.  Scholarships were granted to Palestinian Arab students on a regular basis.  Three athletes that won gold medals in the 1906 Olympic Games were Greek students who had graduated from Robert College. Our first Turkish student to graduate was Hüseyin Pektaş”.

Here, we would like to inform our readers that after studying history for three years at Sorbonne University, Hüseyin Pektaş came back to Robert College in 1905 to teach History and Turkish Language and Literature; he substituted for the famous poet Tevfik Fikret’s classes at Robert College, and later became a Member of Parliament.

Culture and Many Thinkers Bloomed Here

“Robert College and later Boğaziçi University produced many highly esteemed thinkers and artists.  The school was a kind of cultural center of the city in those days. Theatre companies would visit the school, and various concerts were held on campus.  In 1962 Aşık Veysel came for a concert. There was not one vacant seat left in the auditorium while he was playing “Kara Toprak”.  I was also there and that is when I met him.”

“The 1960’s was also the time when shanty houses started to appear in Istanbul.  With the migration from Anatolia, the city was on the verge of a great change. New neighborhoods like Yeni Armutlu and Hisarüstu sprouted. Years before, we used to go on picnics at Yeni Armutlu or rowed along the Bosphorus”.

He Wrote the Most Comprehensive Books On Istanbul And The Ottomans

While listening to his memories we realize that besides his expertise in physics and astronomy, he has always been interested in subjects like literature, history and the cinema, and produced more books on these subjects than in his field of study.  His first book, “Strolling Through Istanbul: A Guide to the City” was published in 1972 and is still regarded as the most comprehensive guide book on Istanbul. “Aladdin’s Lamp”, “The Princes’ Isles”, “The Lost Messiah: In Search of Sabbatai Sevi”, “Istanbul: The Imperial City”, “Inside the Seraglio: Private Lives of the Sultans in Istanbul”, “Byzantine Monuments of Istanbul”, “Cem Sultan: The Adventures of a Turkish Prince in Renaissance Europe”, and “Evliya Çelebi’s Istanbul”,  are only some of the more than 50 books Freely has written. The famous Argentinean writer Alberto Manguel, during his visit to Boğaziçi University as part of Boğaziçi Chronicles program, said John Freely’s “Istanbul: The Imperial City” takes first place among the best books written on Istanbul.

The most important feature that distinguishes Freely from other Ottoman history writers is that Freely removes the sharp lines separating the historical events and the daily life of the period, and reflects the rituals of the times and the human stories of the Sultans of the period rather than merely portraying its political history.

Freely’s Energy is Unending; A New Book is on the Way

Freely’s works have been translated into several languages. Many of them are out of print and are classified as “rare books.” Freely says he has new book projects. One of these, called “Our Village Our University” is on the history of Hisarüstü and Boğaziçi University, and will soon be published by Boğaziçi University Press.

In a nutshell, John Freely is a man of the world, an academic, a scholar, a writer, a wise man and the modern version of Evliya Çelebi.  His ties to life, to the life of the streets, are strong and alive.  For example, when talking about the education system, he argues the importance of adult education and explains that in the US even the poor attend night schools, lamenting the fact that Turkey lacks such a system.  Or, when talking about Istanbul and the urban transformation project, he reminds us how the waterfront villas, the most characteristic feature of the Bosphorus, are disappearing one by one - just like the disappearance of the old residents of the city, the Armenians, Greeks, Jews and the Roma people. Nevertheless, he still thinks Istanbul is not like any other city in the world. He says he will write new books fueled by the passion he feels for the city.  As one of his close friends, Ömer Uluç, said, “John, you are the memory bank of Istanbul”.

The 89-year-old Freely continues to be just that.