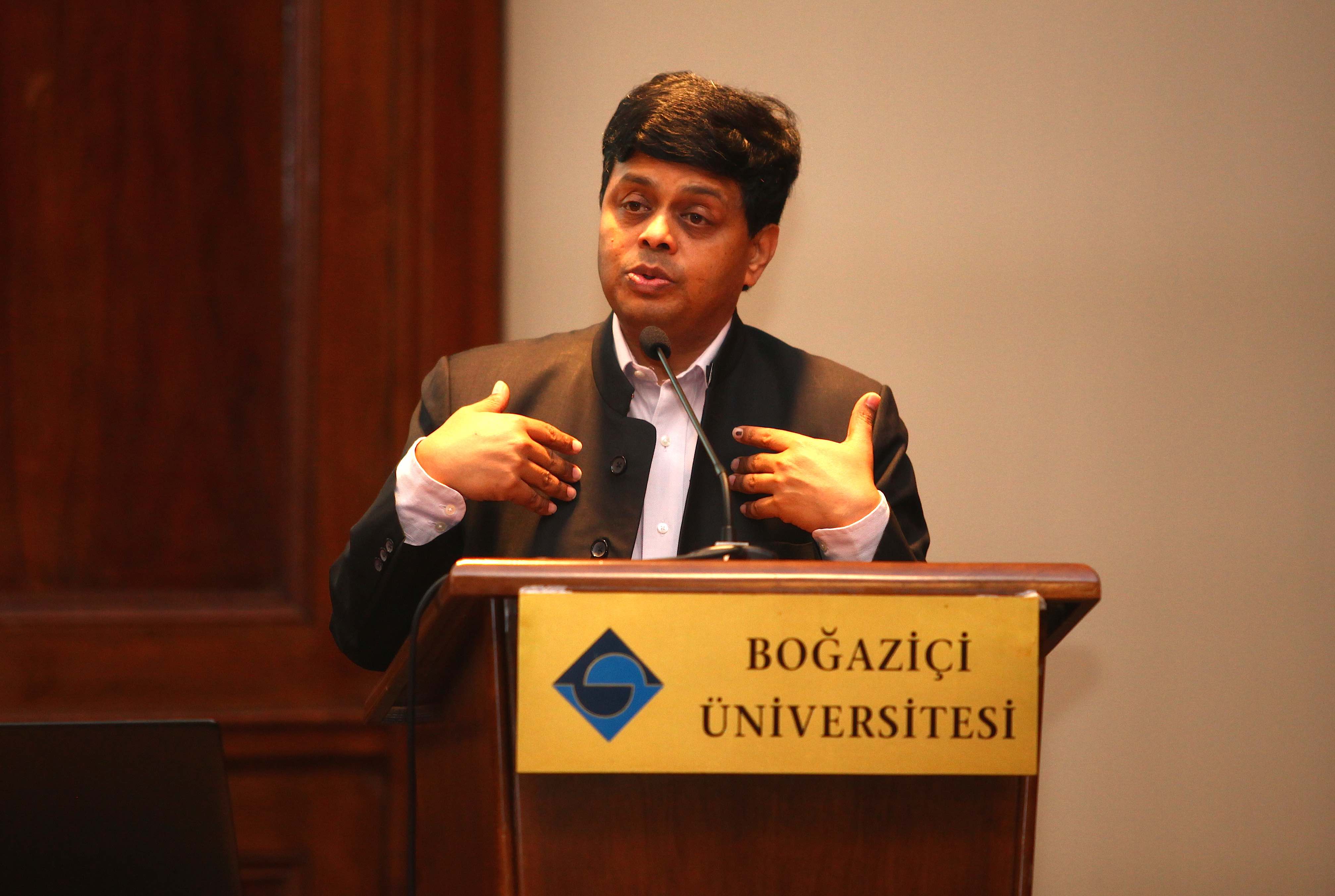 Aromar Revi said that Turkey had an important role in the context of sustainable development and linked this to two major changes taking place in the world.  The first of the changes he mentioned was the shift in the global economy from the North Atlantic to Asia, as a result of which Istanbul had become a more important city due to its geopolitical position.

The second change Revi mentioned was the economic shift from rural to urban areas. He explained that agriculture started to lose its importance as a result of migration to cities, and that in return, this would lead to famine in cities.

Saying that this loss of importance suffered by agriculture paved the way to the death of cities, Revi stated that the next 20 years were crucial for the world and that unless serious attempts were made, cities would be facing a dark future.

As a member of UN SDSN, Aromar Revi is leading a campaign within the United Nations for the sustainable development of cities.

Mr. Revi, as a city planner you have been instrumental in planning a major part of India. You are running the “Sustainable Development Solutions Network for Sustainable Cities” of the UN. What is a “Sustainable City?”  How do you define it?

“As cities are different from each other, the definitions will also be different.  Some cities have environmental problems whereas others have social problems.  Many cities have more complex problems than others. We can see that today some cities are not able to produce their own food and some are faced with a scarcity of water. Therefore, every city has its own characteristics.  For this reason, instead of giving a rigid definition of sustainability, we should focus on what kind of balance exists between the social, economic and environmental factors in each city.

When you look at the world’s big cities, you see hundreds of years of struggle for existence. In this context, sustainable development means what we are going to leave to future generations.  Striking a balance between the present and the future is not only what people need but also what echo systems need. Creating a balance between social groups has become a must.  Therefore, every city has to find its own answer to the question “What is sustainability?”

While our world is becoming more and more complex due to climate change, rapid and unplanned urbanization, and social inequality, all the needs you have mentioned so far are getting more complicated at the same speed as well.  What can be done to tackle these problems in the process of establishing a balance?

“Yes, it is very complex indeed… We are facing many problems, especially concerning access to basic needs.  The whole world is in agreement that we need to end poverty today, before it touches the next generation.

Let’s take Turkey, for example.  From an economic point of view, your country is better off today compared to her neighbors and does not experience the extreme poverty they live in. But you also see Syrian immigrants on the streets in your cities now, don’t you? Why are they here? Because today cities have the answers to the problem of hunger and poverty; cities also have the tools to fight these problems.

Wherever you go in the world, be it New York, Paris, London or Istanbul, you will see homeless people. Some people never have the opportunity to save enough for a house throughout their lives. Even in big, developed cities living standardsare not favorable for at least 10-20% of the population.  For this reason, first and foremost, we have to do something about providing sufficient shelter and adequate living conditions.

Today, the main issue is that we are face to face with all these problems (climate change, social inequality, rapid urbanization) rolled into one. These problems have been signaling their arrival since the 1970’s but we have chosen to ignore the message.  In this context, we have missed a major opportunity for a solution. We have moved on, releasing more carbon into the atmosphere, and the atmosphere has not forgiven us. We are facing the consequences of our actions.

People think cities are sturdy and secure structures, but in reality, today, they are very fragile structures. Our cities are faced with hunger and water shortages. If we do not take the necessary measures now, in 20 or 30 years’ time cities will be impossible to live in.”

Do you think it is possible for a megacity like Istanbul to become a sustainable city?  What advice can you give to local administrators on this subject?

“I would like to share my impressions on Istanbul instead of giving advice. I first visited Istanbul 20 years ago. One thing I can say is that the city has changed incredibly in 20 years. In my opinion, the most interesting thing I can say about Istanbul is that from a strategic point of view, it is situated in a very important location.  When you look to its history, you see that the city has withstood several attacks and invasions. What does this indicate? People have become victorious from centuries of struggle because they own water and resources.

Of course we are in a different period of history; conditions are very different. We have closer relations with the rest of the world. Commercial relationships have become important; we buy and sell products and commodities from each other.  And today, with its population and economy, Istanbul is the biggest city in the country. It is a city of opportunities but also of risks.  An earthquake or natural disaster that may occur today would annihilate all the opportunities created in the economic sense. Thus there is a need to strike a balance between opportunities and risks.”