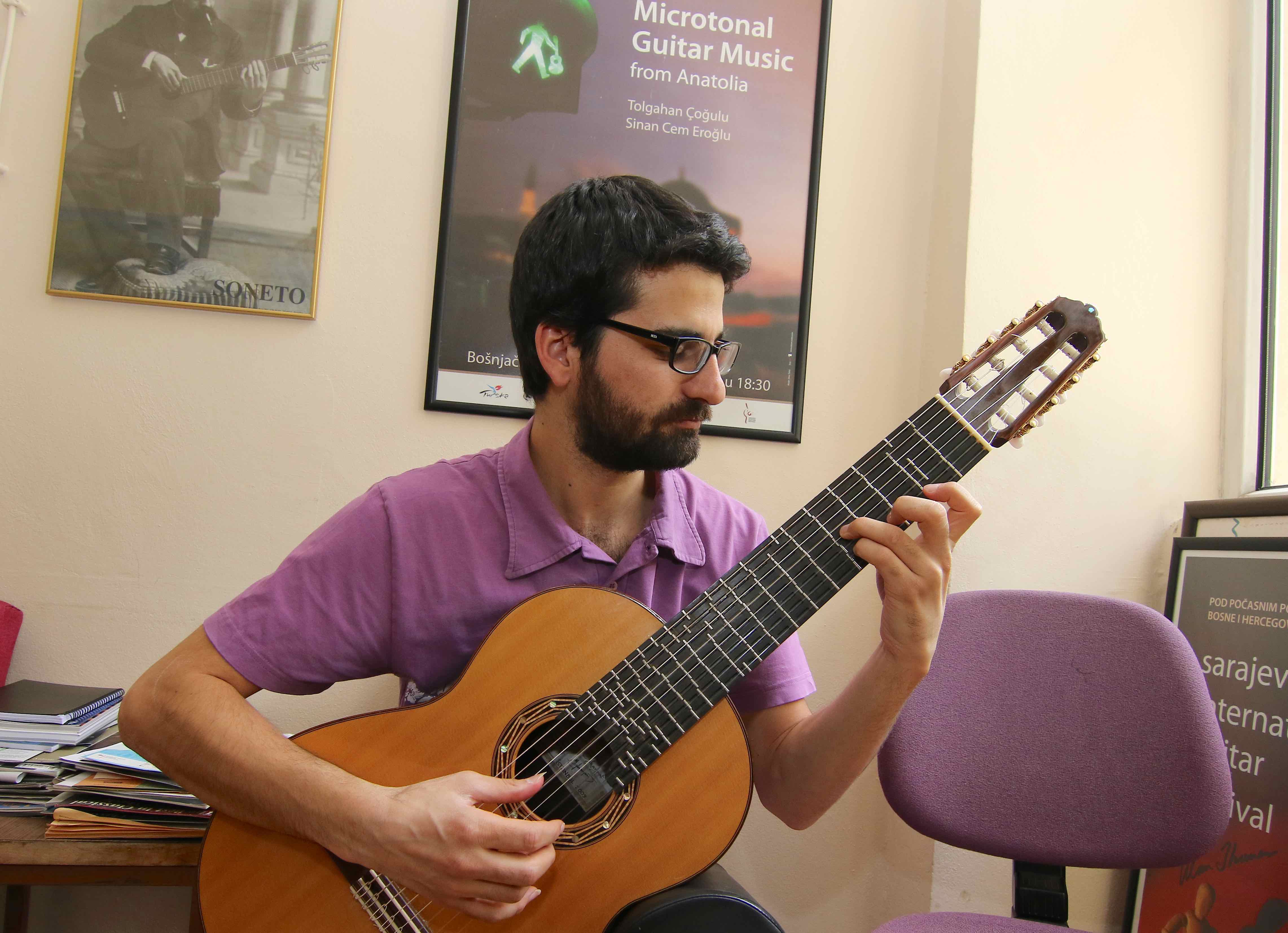 Inspired by the idea of being able to play ‘makam’ music on the guitar, B.U. alum Dr. Tolgahan Çoğulu designed an “adjustable microtonal guitar.” A former guitar player in the group Kardeş Türküler, Çoğulu is currently the Assistant Director of Istanbul Technical University’s Turkish Music State Conservatory Musical Performance Department.  We talked with him about his musical journey and the microtonal guitar he developed.

Dr. Tolgahan Çoğulu got his B.A. degree from the B.U. Management Department in 2001.  His musical journey dates back to his introduction to the Boğaziçi University Folklore Club (BUFK) in 1997.  A poster for a Rengahenk concert that he saw on campus attracted his attention and he attended the concert. That was how he got to know of BUFK.  The concert had a great impact on him, eventually leading to his decision to quit the electro-guitar in favor of the classical and flamenco guitars.

For Çoğulu, whose guitar education started when he was a child, that concert and his introduction to BUFK became a turning point. He developed himself through highly disciplined music instruction, discussions on musical theory, and readings in arts held at BUFK; he stated that the regular concerts at BUFK in those years were his major source of motivation.

Sometime during his graduate studies at B.U., Çoğulu transferred to Istanbul Technical University’s Turkish Music State Conservatory. He argues that students who work vigorously and learn music on their own (‘alaylı’) should be given the chance to pursue music education at the graduate level in universities.  He says that one of the most important problems at conservatories in Turkey today is the fact that they fail to give their students a critical, experimental understanding of music and art.  In that context, he thinks BUFK gives the type of music education that many schools cannot.

His admission to Istanbul Technical University’s Dr. Erol Üçer Center for Advanced Studies in Music (ITU MIAM) in 2001 marked a milestone in his development because until the establishment of the Center 1997, graduate schools of music in Turkey required their candidates to hold undergraduate degrees in music to be admitted to their institutions.  Çoğulu eventually became a research assistant at MIAM and began his doctoral studies.

Playing the Music of These Lands on the Guitar

Dr. Tolgahan Çoğulu’s microtonal guitar adventure began at a panel discussion he organized at BUFK in the year 2000.  The subject was “The Adaptation of Bağlama Techniques into Classical Guitar Performance.”

Erkan Oğur, Melih Güzel and Bekir Küçükay (who was to later be his teacher in the doctoral program) were among the participants.  The panel discussion proved to be very important because the association between Anatolian folk music and the guitar was put on the table.  Çoğulu described the discussion as follows: “The music of Turkey is ‘makamsal’, and ‘makamsal’ music is microtonal.  In other words, in Turkish music the intervals are smaller than a semitone and therefore, they are impossible the play on a conventional guitar or piano.  So what can a guitar player do to play Anatolian folk music on the guitar?  The ‘kanun’ plays in one makam or the ‘kaval’ plays the ‘taksim’ in another makam in semitones, and the notes played by the guitar clashes with these sounds. So I started a search for a different guitar.”

During that panel Çoğulu developed his first draft of guitar design; he replaced the frets of his guitar with "bağlama" frets and showed it to Erkan Oğur, the pioneer of the fretless guitar.  However, he later abandoned the idea of playing a fretless guitar, and resumed his quest for a guitar suitable for polyphony. Meanwhile, he was continuing his studies by reading extensively on the history of the guitar. Çoğulu told us that the usage of existing, unnatural systems in music was being discussed in music schools in Europe and the U.S. as well. His studies culminated in his design of an “adjustable microtonal guitar” in 2009. The striking structural feature of this guitar was the addition of small and removable frets into the small grooves under each string.

His adjustable microtonal guitar journey still continues with compositions made for his special guitar by composers from 30 different countries including the U.S., Romania, Mexico, and Italy.  He has participated in festivals in over 28 countries and received awards.  For example, in 2014, at the Georgia Institute of Technology Margaret Guthman Musical Instrument Competition, first place went to Tolgahan Çoğulu and his adjustable microtonal guitar; he also received the People’s Choice Award (best performance) in the same competition.  In the same year, he also received the Special Award presented annually by the Turkish music magazine Andante within the framework of the Donizetti Classical Music Awards.

Çoğulu has an album of microtonal music titled Atlas recorded by Kalan Music.  His second album Microtonal Guitar Duo will be out soon.

Currently, Çoğulu is continuing his work on “Automatic Microtonal Guitar” with the support of Istanbul Technical University’s Mechanical Engineering Department.  He is also in the process of writing a book titled “Introduction to Microtonal Guitar Method.”  Çoğulu has co-authored the book “Basic Music Education” with Birgül Serçe.