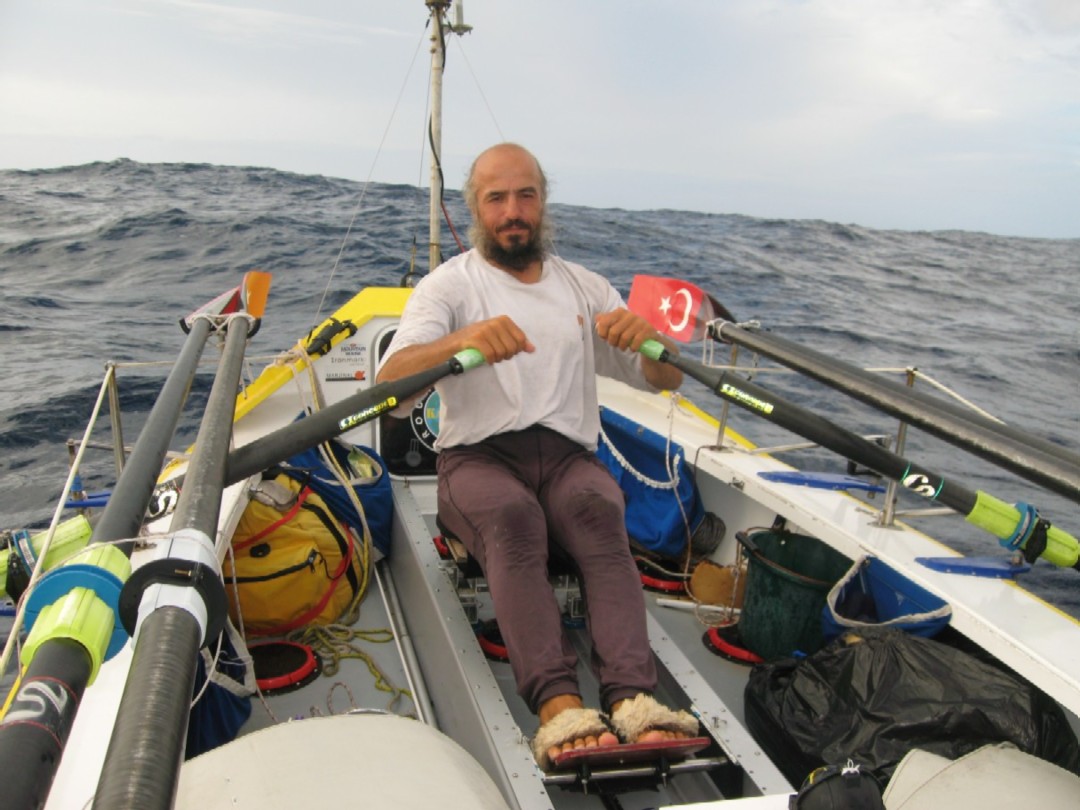 Erden Eruç (BU ’83) is an adventurer who became the first person in history to complete an entirely solo and entirely human-powered circumnavigation.  His most recent project is named Journey to Peace:  rowing solo across the ocean, from New York to Çanakkale, entirely on his own power, with the aim of commemorating the 101st anniversary of the Battle of Çanakkale.  His Journey to Peace started from New York on May 24, and is planned to end in Çanakkale in February 2016.

Erden Eruç received his B.S. and M.S. in Mechanical Engineering at Boğaziçi University and his M.B.A degree from George Mason University in the United States.  He has broken several records and put his stamp on many firsts in the course of his exploits.

Eruç is the first person in history to cross the oceans solo on his own power alone – no sails, no motor; he is the holder of the record for the fastest circumnavigation completed solely by muscle power – in a total of 5 years 11 days, he has covered a total of nearly 29 nautical miles, all on human power.

In 1997, while working as a consultant in the area of information processing, he found himself looking at a world map on the wall and began dreaming of a journey around the world only on human power.  9 years later in 2006 he rowed from the Canary Islands to the Caribbean Sea in a 7.2-meter long ocean-going rowboat, becoming the first Turk to cross the ocean by rowboat on human power.

In September 2002, Eruç and his friend, the Swedish climber Göran Kropp, were rock climbing in Central Washington when Kropp fell and died while they were making their way up a 26-meter climb.  Kropp had often urged Eruç to start the journey he had been dreaming of for years.  On his way home from Kropp’s funeral, Eruç sketched a map of the world on a piece of paper and marked the highest peaks of 6 continents, excluding Antarctica.  And the Six Summits Project was thus born – circumnavigating the world to honor his friend, cycling/walking on land and rowing at sea, entirely solo and entirely on his own muscle power.

In the summer of 2007, Eruç started the first leg of his circumnavigation project:  he set off from California, rowing in the southwest direction.  After struggling for 312 days in the Pacific Ocean, he reached the waters of Papua New Guinea, breaking the world record as the ocean-rower staying the longest at sea.

He continued his adventures crossing the Bismarck Sea and the Coral Sea in the Southern Pacific, and then the Indian Ocean.  He was honored by the London-based International Ocean Rowing Society as the first seaman in history to cross three separate oceans.  He is still the first and only person who crossed the entire Indian Ocean from Australia to Africa.

During this journey, Eruç cycled and walked on land and, when conditions required, used a sea-kayak and rowed.  He set off from Namibia rowing towards the south Atlantic in October 2011 and reached Venezuela in 153 days on March 22, 2012.  This stage of his voyage was the first and only solo ocean crossing on human power alone completed in the Northern Hemisphere.

In the final stage of his journey, Eruç rowed across the Caribbean Sea and reached Louisiana via the Gulf of Mexico.  When he reached land on May 27, 2012, he had been at sea for a total of 876 days.

The First Person to Circumnavigate on Human Power

In July 2012, 5 years and 11 days after he started his journey, Eruç arrived at the exact point he had set out from.  Having covered a total distance equaling 29,000 nautical miles, Eruç is still the most experienced ocean rower in the world, and the only one in Turkey. He is the recipient of the 2013 Citation of Merit from NY Explorers Club of London; he is listed in the 2009, 2012 and 2014 Guinness Book of Records. Among the awards he has received in Turkey to date are the Fair Play Award conferred by the Turkish Olympic Committee, the Summit Award of Mountaineering given by the Zirve Mountaineering Club, the Golden Dolphin Award of the independent newspaper Turkish Maritime Trade, the 2012 Best of ExplorersWeb Award, and the 2013 Adventurer of the Year Award of Outside Magazine.

To share his experiences with the public and with primary school students in particular, Eruç established the Around-n-Over Foundation in Seattle in 2003.  He has donated over $90,000 to ILKYAR, the aid foundation for elementary schools, to be used to support aid organizations, students in rural areas, and educational projects in Turkey.  He also contributed to the construction of a dormitory for female students in Batman.

Erden Eruç is aiming to reach Gelibolu around January or February of 2016.  He will participate in the ceremonies marking the anniversary of the Battle of Çanakkale on March 18 and April 25, 2016, to pay tribute to the soldiers who died in the Dardanelles during the war.

You can get more information about this extraordinary man, who set out to make the world a better place to live and make a difference in the lives of children, and his projects at: