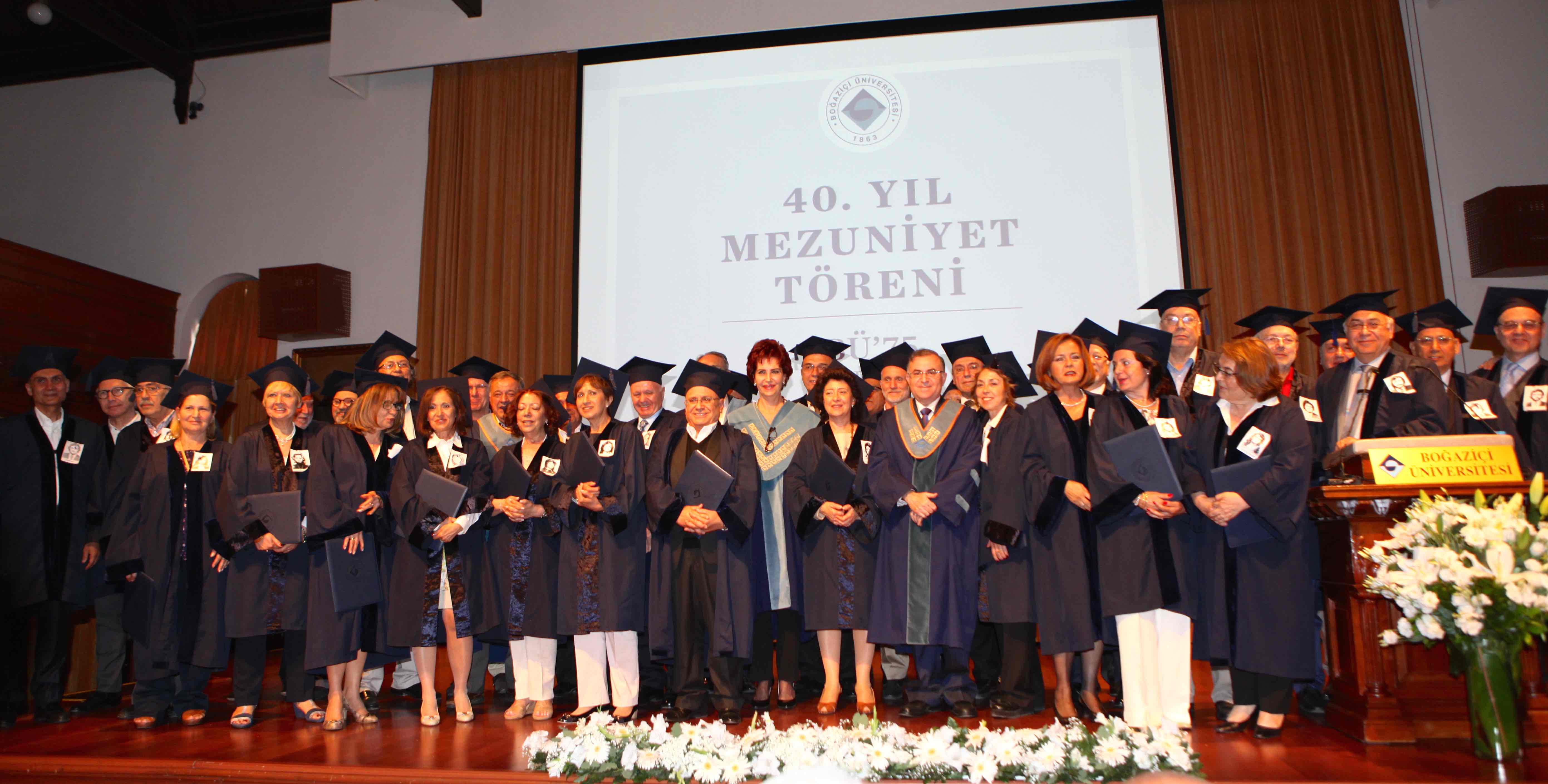 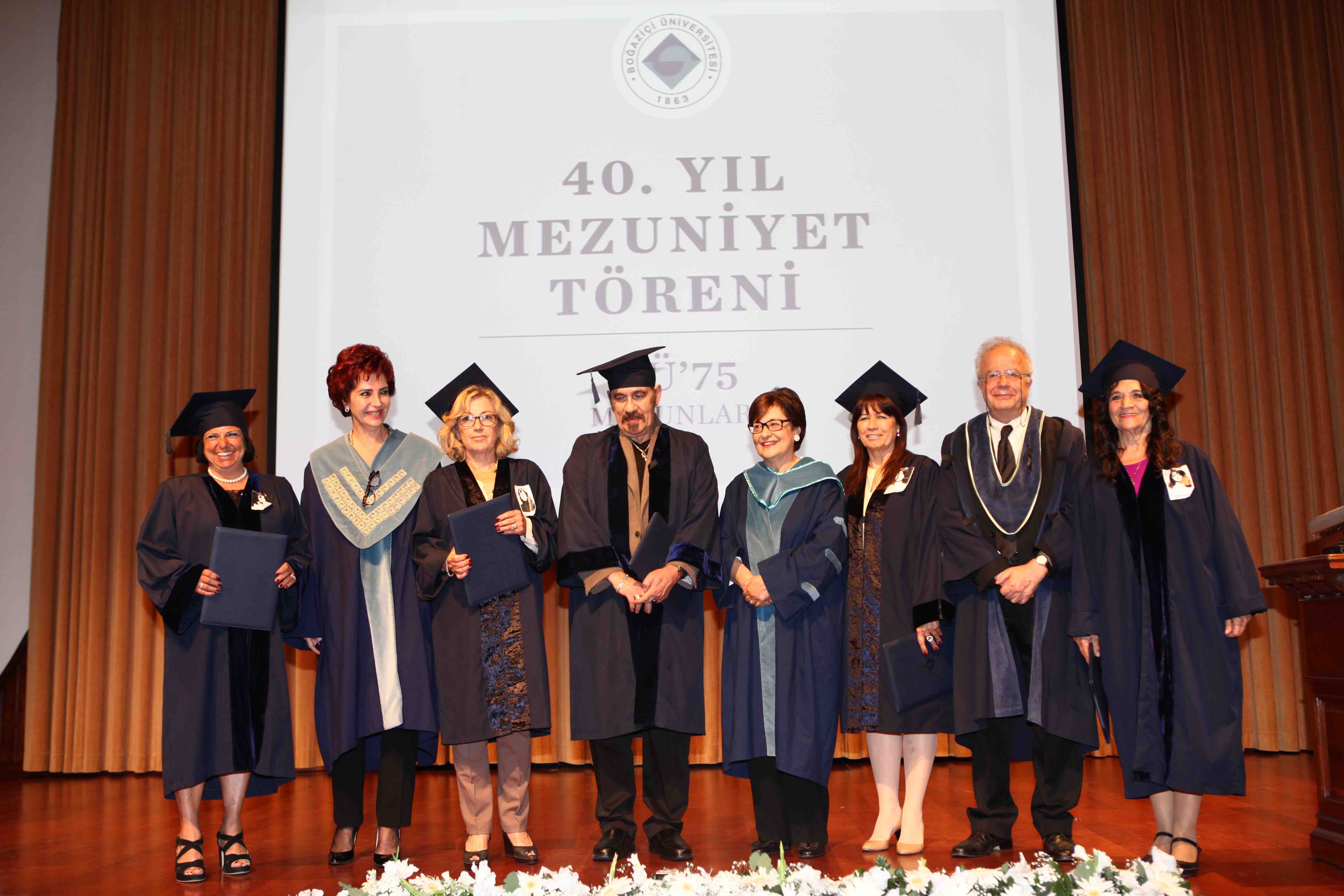 At the 40th anniversary of their graduation from Boğaziçi University, the graduates of 1975 got together at a reunion ceremony held at the South Campus on May 30 and relived the joy and excitement they felt 40 years ago.

94 members of the class of ’75 participated in the ceremony held at Albert Long Hall. In the memorable speech she made on behalf of the class of 1975, Neriman Ülsever, the current Director of Human Resources at Sabancı Holding, said that being a member of the Boğaziçi community is as much a privilege today as it was in the 1970s.

Comparing Boğaziçi to a 150 year-old grand oak, Ülsever said, “Being from Boğaziçi University was a privilege in the 1970s; it is still a privilege today.”

“Recent graduates come into my office,” she said, “proudly announcing, ‘I am from Boğaziçi University’.  And I say to them, shyly, ‘When I graduated you were not even dreamed of!’”

Ülsever stated that the class of 1975 had produced several important persons with many achievements in various fields, from arts to academia and civil society to bureaucracy.  She went on to give a brief breakdown of the past 40 years with anecdotes from her generation.

In her address to the class of 1975, President Gülay Barbarasoğlu said, “40 years is a very long time in our culture, literature, customs and traditions.  Yet today we feel like these forty years have passed at the blink of an eye.  When lived to the fullest, these 40 years are the most precious period in our lives. Today you are witnessing the transformation that our university has gone through in 40 years. But one fact has not changed: with its culture, faculty members, students, and alumni, Boğaziçi University is the best university in Turkey and will continue to be so.”

In her speech Barbarosoğlu emphasized that a strong university gets its power from its graduates.

Prof. Mustafa Dilber and Prof. Yorgo İstefanopulos, who attended the ceremony representing the faculty, addressed the audience and related many humorous anecdotes. Prof. Güven Alpay, who could not attend the ceremony, sent a celebratory message.

Work Produced in the Boğaziçi Spirit

Following the speeches, President Gülay Barbarosoğlu and Dean Ayşegül Toker presented Certificates of Recognition to the graduates of the Faculty of Economics and Administrative Sciences. Faculty of Engineering alumni received their Certificates from Dean Levent Akın. President Barbarosoğlu and Prof. Emeritus Cevza Sevgen presented Certificates to the graduates of the Faculty of Arts and Sciences.  Dilek Özmen Gündoğu made the concluding speech at the end of the ceremony and thanked the President, the faculty members present at the ceremony, members of BU Alumni Association and BU Foundation, the BU Alumni Chorus, and the Organization committee for their efforts in organizing this meaningful and special celebration.  She stated that the fact that 40 years had passed was of no significance, and reminded the audience that Pasteur had discovered the rabies vaccine when he was 63, Galileo was 73 when he made sketches of the moon, and that Goethe had completed his masterpiece “Faust” at the end of 5 years of hard work at the age 82.  She emphasized that the Class of 1975 should continue to live their lives with the spirit and responsibility of Boğaziçi membership.

Following the tossing of caps and the performance of the Boğaziçi Alumni Choir, young trees were planted, photographs were taken and the ceremony ended with a wish to meet at the Class’s 50th anniversary. Among those also present at the ceremony were Boğaziçi graduates from Greece and England.