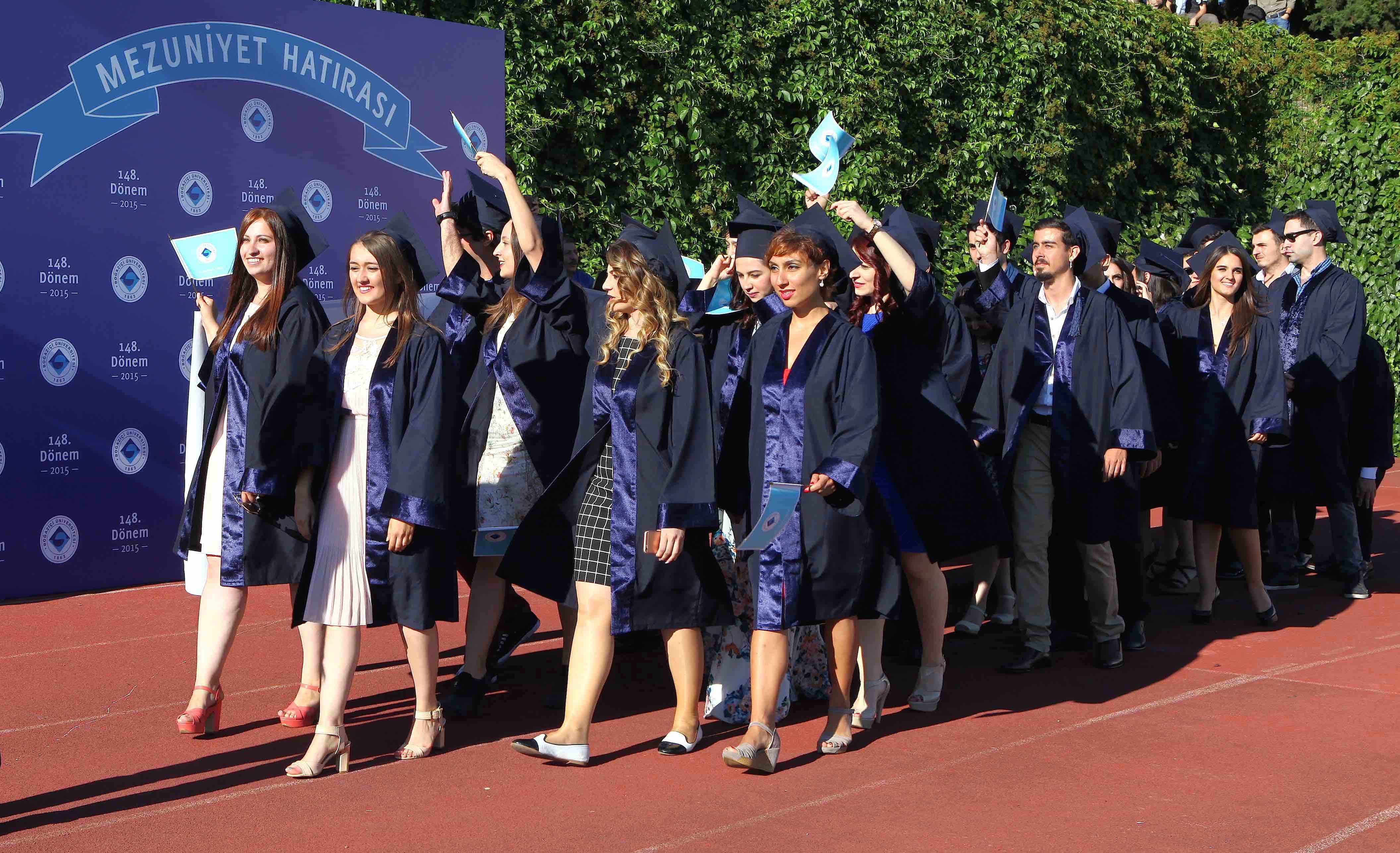 Boğaziçi University’s 148th commencement ceremony took place in the Uçaksavar Sports Facility on June 24, 2015. Dr. Kenan E. Şahin, often referred to as one of the “most effective 50 Turks in the USA” and a graduate of Robert College, man of science, and an entrepreneur who resides in the United States, was granted an Honorary Doctorate by the Faculty of Engineering during the ceremony, for which he was also guest speaker. In the same ceremony, Gökhan Öğüt, a 1993 graduate of the Faculty of Engineering and the CEO of Vodafone Turkey, received the BUMED Special Award.

President Barbarosoğlu: Knowledge Becomes Inclusive to the Extent that it is Used in the Correct Place”

In her opening speech, President Gülay Barbarosoğlu said, “We are living in times when technology needs to advance in many areas every day.  At this point we face the concept of innovation – a concept that has put its stamp on all sectors, a concept that cannot be ignored.  Innovation -  it means creating new values, differences.  Not only a new technology or a new product… Behind everything that has become a part of and has transformed our lives, from the social media to the cell phone, from the sewing machine to the airplane, there lie complex processes that cannot be reduced to technology alone. It involves numerous factors from design to communications, from organizational structure to culture.  In such a world, we need more than ever a generation capable of inter-disciplinary thinking, sensitive to social and cultural processes as well as technology.  That is the only way the innovation and knowledge that is created can reach all social all segments of society where it is urgently needed.”  Emphasizing that innovation and knowledge can be inclusive and can transform the world and our country to a more livable and sustainable place, Professor Barbarosoğlu added, “At this point, each one of you carry important responsibilities towards a sustainable, prosperous, free and happy society.”

In his speech during the Commencement Ceremony, Dr. Kenan E. Şahin recommended that graduates “select models, apply, innovate.”  He said, “Engineering is a profession that takes technology out of knowledge and science and practices it.  In my opinion a doctor is also an engineer, so is someone who develops a company.  This is because they have both developed and practiced.  There are many areas where an engineer can perform his profession, and technology is very important for us in all those areas.  The fact that 80 million people can live together in Turkey, or 1.3 billion in China, is due to technology.”  Touching upon technologies of the future, Şahin said, “Important opportunities for engineering exist in the near future.  In particular, mega technologies on climate change will provide the future generations with amazing opportunities.”

Dr. Kenan Şahin continued by pointing out that the basis of democracy is technology. “Its source is criticism.  There can be no democracy where everyone is satisfied.  It was very important for Turkey to develop a technology of criticism, and Turkey has done that.  Universities share an important part of the responsibility in the establishment of this system.  Secondly, it is important to establish organizations that are capable of conflict resolution.  Unless these organizations are sustained, democracies will face destruction.  There are several organizations in Turkey that can resolve conflicts.  The third step that is important for the establishment of democracy is protecting institutions that will protect those organizations. The technology of democracy that I envision has been set up in Turkey.”

Musa Tecirli, who graduated from the Civil Engineering Department of the Faculty of Engineering, made a speech in the name of the 2015 graduates, and said, “As students graduating from the best university in Turkey, we know that we will be successful and will make a difference, regardless of what job we do.”

Awards were presented to students with outstanding performance in sports, culture, arts and social responsibility in addition to their academic achievements.  The President’s Award was given to Murat Uzun who graduated from the Civil Engineering and Physics Double Major Program with a GPA of 3.95, in recognition of his academic performance as well for representing BU in various fields in national and international competitions.

The Rectorate Special Award was given to Halil İbrahim Çağatay Özdemirfor his successful activities as President of the Council of Student Representatives and for raising awareness regarding the importance of students’ participation in the university administration.   Özdemir graduated from Political Science and International Relations and Economics Double Major Program with a GPA of 3.46.

Barış Bircan, who graduated from Mechanical Engineering and Physics Faculties simultaneously with a GPA of 3.98 became the winner of the Double Major Graduate Award. The Most Successful Foreign Student Award went to Semih Chosein in recognition of his achievements in academic and extracurricular activities. Chosein finished the Civil Engineering department with a GPA of 3.46.

This year, The Mümin Tansever Club Activities Award was presented toRonay Bakan, member of the Women’s Research Club and a graduate of the Political Science and International Relations Department; and Mehmet Caner Soyulmaz, a graduate of the Department of Philosophy, who served as President of Boğaziçi Players for two years.

Awards were also presented to instructors to encourage good teaching and improvements in education processes, and to graduating doctoral students to encourage young researchers.

Students who graduated from the Faculties of Economics and Administrative Sciences, Engineering, Arts and Sciences, as well as Master’s and PhD students graduating from Institutes received their diplomas.  Families of the graduating students and teaching staff were present at the ceremony.  In addition to students who were at the top of their classes in the 2014-2015 academic year, many other successful students were presented with various awards.  347 students were named in the Honors List and 150 in the High Honors List. The ceremony ended with the students throwing their caps in the air.