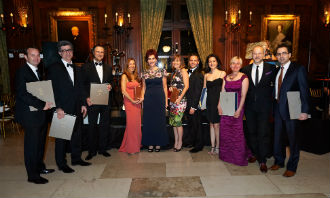 As part of its growing outreach efforts to reestablish, strengthen and steward its relationships with both alumni and friends in North America, Boğaziçi University conquered New York City again this past April! Not only did it have its first U.S.-based fundraising gala but also hosted its first panel, adding a milestone academic component to the gatherings the University first started organizing in New York City last year as part of its 150th anniversary celebrations.

The 2015 Gala was kicked off on Friday, April 17th at Nasdaq’s Times Square headquarters, where the company acknowledged the evening with a celebratory message that was broadcast live on its 7-story high Nasdaq’s Tower at 12 noon, just in time for the lunch-hour crowds that filled Times Square. “Nasdaq Highlights Boğaziçi University’s Gala Dinner, April 18, 2015” read the huge announcement, interspersed with images of the Boğaziçi delegation present to celebrate the occasion. “This is just amazing”, said Metin Göksel, head of Corporate Communications at Boğaziçi University. “This moment is hugely successful in terms of recognition and brand-awareness for our institution”, he commented, adding, “It is also super fun!”

The following evening, on Saturday, April 18th, Boğaziçi University held its first North American fundraising Gala Dinner at the University Club of New York, its second event at the beautiful mid-town institution. Honored that evening was Dr. Kenan Şahin(RC’ 61), Founder and President of TIAX LLC & CAMXPower LLC, an alumnus of Boğaziçi University’s predecessor Robert College and respected former professor at Harvard, MIT, and the University of Massachusetts at Amherst.  In her welcoming remarks, President Gülay Barbarosoğlu emphasized that over the span of a long and distinguished career, Dr. Şahin had raised the prominence of Turkish educators, entrepreneurs and philanthropists throughout the world, stating that, “in innumerable ways, Dr. Şahin’s accomplishments embody the values, vision, and mission of Boğaziçi University and we cannot think of a more deserving individual to recognize.” In his moving speech, Dr. Kenan Şahin thanked Boğaziçi University for investing in the success of its students and shared his thoughts on the role and future of education in Turkey. His positive outlook lifted everyone’s spirits.

President Barbarosoğlu spoke eloquently about the importance of bolstering the institution’s Endowment. “I will not mince my words,” she stated. “In order for Boğaziçi to be able to fulfill its promise to its alumni to protect and enhance the value of their diplomas, it needs to become more financially independent. To do so, it is absolutely crucial that its endowment be strengthened.”

President Barbarosoğlu stressed that, being a public institution, Boğaziçi’s main source of income was government funding. “Although we generate 20% of our budget through competitive research funding, we are still extremely vulnerable to downturns in the economy, budget cuts, decreases in government spending, and fluctuations in the political climate,” she said, adding, “A strong endowment will provide the university with the income stability that it needs to overcome this vulnerability and will ease the pressures on the university’s operating budget to build a resilient academic environment. A healthy endowment will allow Boğaziçi University to pursue critical initiatives that enhance its ability to continue to be a leader in higher education and research. As it becomes financially more independent, its legacy, values, priorities and autonomy, rather than external forces, will continue to impact university decisions.”

President Barbarosoğlu concluded her statements with a call to action, asserting that, “Boğaziçi University needs a strong endowment to guarantee its future. All members of the Boğaziçi community, whether they be alumni, parents, or friends, who make contributions to the university’s endowment are in essence ensuring that the institution will exist eternally. I sincerely believe that the Boğaziçi community will rise to the challenge and embrace my administration’s vision of a strong, alumni and friend-supported public university”.

Over $180,000 (close to half a million TL) was raised for the University, an impressive sum given that the Gala represented Boğaziçi’s first fundraising endeavor in the United States. The Gala was co-chaired by Alp Baysal, Batur Biçer, Hafize Gaye Erkan, Mehmet L. Kirdar, Uğur and Ayşe Köylüoğlu, Deniz Özenbaş, and Aysu and Serhan Seçmen, all of whom played an enormous role in its success.

On Monday, April 20th, Boğaziçi University hosted its first panel discussion outside of Turkey at the Harvard Club of New York. Entitled “Turkey in the Twenty-first Century: Understanding Social, Economic, and Political Transformations”, the panel was comprised of three of the most foremost Turkey specialists in the United States, Prof. Çağlar Keyder of Binghamton University, Prof. Kemal Kirişci of The Brookings Institution, and Prof. Dani Rodrik of the Institute for Advanced Study in Princeton, New Jersey.

Prof. Keyder’s focus was on the trajectory of social transformation in Turkey, while Prof. Kirişci re-visited Turkey's “Strategic Depth” in the 21st Century. Prof. Rodrik took an in-depth look at the Turkish economy in a comparative context.

Speaking to a packed room and a rapt audience, panel moderator Biray Kolluoglu of Boğaziçi University stressed in her opening remarks that the event was important for Boğaziçi on many levels. “This academic gathering represents a new chapter in the University’s outreach efforts, at the heart of which lies Boğaziçi’s continuing quest to become an even more globally distinct institution,” she stated, adding that, “Based on the belief that Boğaziçi University has set the standard for a university in service to the international community, these outreach endeavors are aimed at ensuring that it be increasingly perceived as an international leader and at reinforcing the its mission in global terms through actively encouraging international activities that will further strengthen it in the years to come.”

The alumni get-togethers continued on Tuesday, April 21st, when the Boğaziçi delegation met with graduates of the Faculty of Economics and Administrative Sciences for a cocktail-hour gathering at Pera Mediterranean Brasserie.

Boğaziçi University continued its outreach efforts throughout the week of April 20st, when President Barbarosoğlu and the other members of the BU delegation held meetings at Columbia University, New York University, and Yale University. Both existing and potential collaborative projects were discussed in detail with Columbia University Provost John Coatsworth, New York University President John Sexton and Yale University President Pete Salovey. Meetings were also held with the Deans of NYU’s School of Engineering and Stern School of Business, the Deans of Columbia’s School of Engineering and Applied Science and Business School, the directors of the Yale-Fox Fellowship, and with the faculty and administration of the Yale MacMillan Center for International and Area Studies.

All told, these April 2015 events played an essential role in reaffirming Boğaziçi’s role as a leading international university and in strengthening its ties with its alumni.