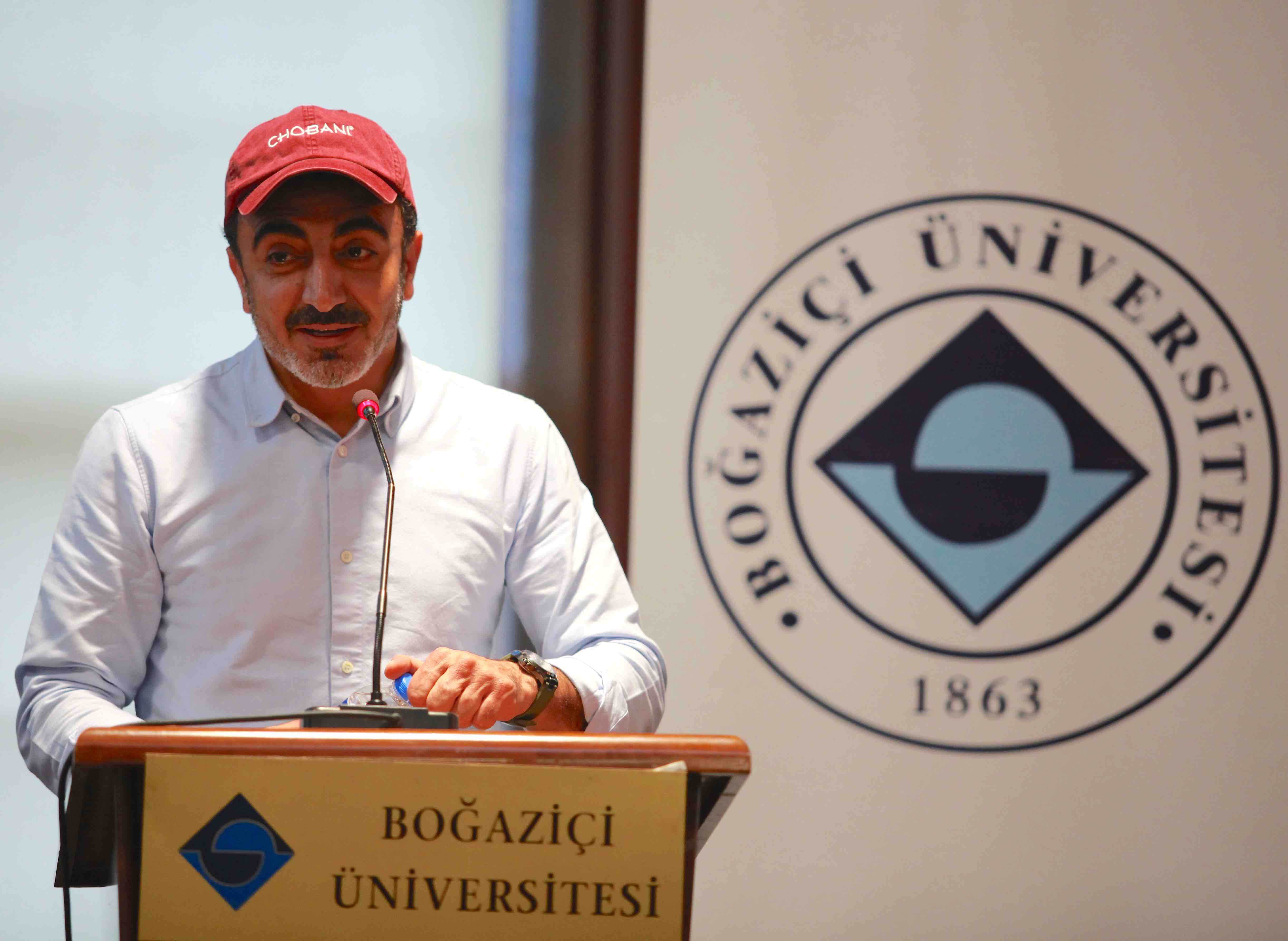 Hamdi Ulukaya shared key headlines from his start-up adventure with Boğaziçi University students, and said, “In the U.S., at pretty much every step in your life, you’re asked this question:‘What is your purpose?’My purpose was never only money.Money is a tool, and should not turn into an objective.In Turkey, for instance, there are millions of people who are unhappy about the state of affairs in the country.Is there any brand here that voices this discontent, that cares about the environment, human rights, youth, and women, and says something about them?There is no such brand in Turkey.And that is how Chobani first started out.”

No Brand in Turkey Has a Genuine Story

Ulukaya said there were very good products in Turkey, but not a ‘brand’ that stands out with its personal story and character, and added, “Brands have to be brave.They have to tell their own real stories.They have to put their character out there, because truth is a value above all others.”

The famous entrepreneur said this was his guiding principle as he was creating the Chobani brand, adding that he initially spent all his capital on designing his yogurt’s container.Ulukaya explained that instead of using the standard container design prevalent throughout the U.S., he went to Colombia especially to create a new design, which made it possible to place his products in major chain stores, and introduce Chobani to consumers via a special design that had never been tried before.

Growth by Word-Of-Mouth Marketing in the Digital Age

Ulukaya said that after establishing the brand, he himself answered all the phones during the first three years, and personally worked at the factory for five years, reaching a large number of Chobani consumers over time.Saying that Chobani grew via “word-of-mouth marketing in a digital age,” Ulukaya added that turning a product into a brand is both the hardest and the easiest thing in the world.

“If you think of a brand as the personality of a person, it becomes very simple.What I learned on my journey through the business world is this: if you don’t drown in the details and don’t get lost in the clouds, if you can realistically focus on the details but also keep dreaming, then you can do great things."

Noting that this was the first time he spoke at a university in Turkey, Hamdi Ulukaya said he considered Boğaziçi University “Turkey’s Harvard” and was honored to be here.

Who Is Hamdi Ulukaya?

After graduating from the Department of Political Science at Ankara University, Ulukaya went to the U.S. in 1994 and began to study at the University of Albany in 1997. He founded a feta cheese company called Euphrates in a suburb of New York in 2002.In 2005, he bought an old yogurt factory and founded Chobani.He began manufacturing Turkish-style strained yogurt in 2007, which became popular in the U.S. as “Greek” yogurt.In 2009, Ulukaya was named one of the “forty most successful entrepreneurs under 40” by The Business Review.According to Bloomberg, Ulukaya’s net worth in 2013 was around 5.4 billion USD, and Chobani was named the top-selling yogurt brand in the U.S.Ulukaya was also named “Ernst & Young World Entrepreneur of the Year” in 2013.