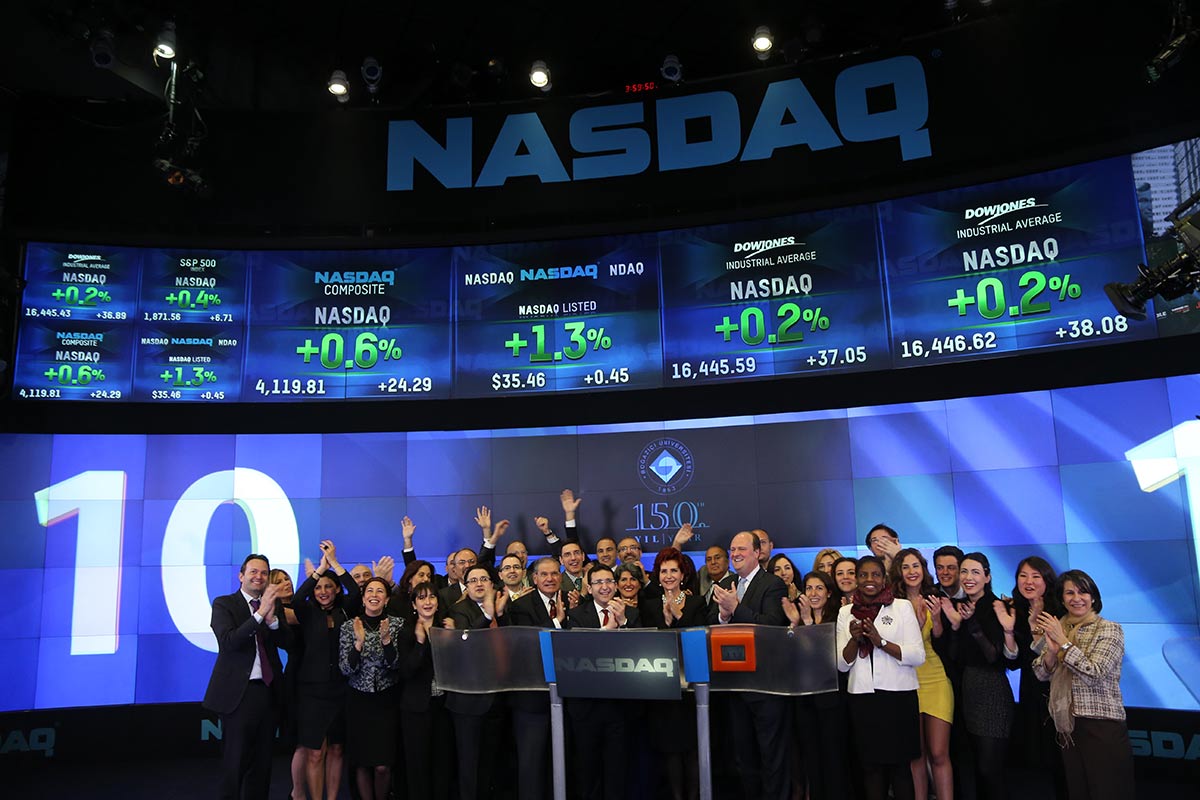 Boğaziçi University sesquicentennial celebrations in New York City started on April 21st, when President Gülay Barbarosoğlu rang Nasdaq’s closing bell at its headquarters in Times Square. Accompanying her at the ceremony were approximately 40 people comprised of members of Boğaziçi University’s New York delegation (including its Senators and Executive Board members), faculty, students, friends and alumni, one of whom was Ibrahim Turhan, CEO and President of BORSA Istanbul.

In his welcoming remarks, David Wicks, Vice President of NASDAQ OMX’s Global Corporate Client Group, emphasized that Boğaziçi University, founded as Robert College in 1863 in Istanbul, Turkey, was the first American institution of higher learning established outside of the United States. He went on to state that Boğaziçi was Turkey’s premiere university and one of the top 200 universities in the world.

President Barbarosoğlu stressed in her remarks that the closing bell ceremony was symbolic because it was being held not only to mark the 150th anniversary of the founding of the university but also to honor the Americans who founded it. President Barbarosoğlu expressed her happiness at being able to ring the closing bell and thanked all involved for their efforts, emphasizing that she was ringing the bell in honor of all the visionary Americans who have played a crucial role in making Boğaziçi University what it is today. Stating that the ringing of the bell was also arranged to celebrate Boğaziçi’s partnership with Fordham University, which cooperates with the NASDAQ OMX Educational Foundation in its Master’s Degree in Global Finance, President Barbarosoğlu ended by saying, “We promise today that with the support of our friends in the United States, at Fordham University and at NASDAQ, we will continue our educational services for another 150 years.”

Prior to, during, and after the ceremony, which was broadcast live on the 7-story high Nasdaq’s Tower, images of its participants and Boğaziçi’s promotional video were continuously aired on the huge screens overlooking Times Square.

Boğaziçi University’s week in New York City ended with the April 26th 150th Year “by invitation only” gala dinner at the University Club, one of the oldest and most prestigious social clubs in the United States. Hosted by President Barbarosoğlu, this joyous event was attended by over 400 distinguished guests, many of who traveled great distances to be there. Included among those in attendance were members of the University’s Senate and Executive Board, its alumni, Turkey’s Ambassador to the United Nations and its New York Consul General, faculty and administrators from its U.S. academic partners, and many of its friends from both the public and private sectors. The evening’s Master of Ceremonies was Ms. Jülide Ateş İskeçeli, NTV Anchorwoman and alumni, who came from Turkey to emcee the event.

In her welcoming remarks, President Gülay Barbarosoğlu spoke about her feelings regarding the institution’s 150th anniversary celebrations by stating, “When I decided to run for the presidency of Boğaziçi University, one of my motivations was to be at its helm during its sesquicentennial anniversary because I felt it was my duty to ensure that this very special occasion be marked in a way that would be commensurate with all that it has meant and continues to mean to the members of its community. This anniversary deserves celebration because as John Freely, one of its most distinguished professors, so succinctly wrote, Boğaziçi has indeed kept alive the traditions it inherited from Robert College and is a cultural beacon that shines across all boundaries and divisions, set apart by its student’s and faculty’s diversity and its acceptance of ethnic, religious, and cultural differences.”

President Barbarosoğlu made reference to Boğaziçi’s American heritage by stating, “It has successfully perpetuated the liberal arts educational tradition passed on to it by its predecessor. This legacy of academic autonomy, scientific freedom and independent thinking continues to inform Boğaziçi University’s every undertaking, and the academic traditions of Robert College remain at its nucleus.”

President Barbarosoğlu also placed much emphasis on where she believes Boğaziçi is today: “With its full commitment to institutional freedom and democratic governance, Boğaziçi University represents a way of life free of prejudice and bias. Based on its vision of a society that acknowledges differences, and accepts and respects them, this democratic culture has managed not only to sustain but has also allowed to flourish a community where individuals from all walks of life can live, learn, and enjoy life and the pursuit of knowledge together. It is a culture that remains alive in every part of the University, from its academics to its students and from its administrative staff to its alumni. This culture indeed embodies Boğaziçi University’s academic heritage and its vision for the future, which in part rests on empowering its students to become global leaders and citizens. Today, Boğaziçi University maintains its position as the highest ranked institution of higher education in Turkey and as one of the world’s most respected universities. In order for it to continue its excellence in academics and research, it needs to secure and further diversify its networks of collaboration and mutual support. Thus, global collaboration remains at the heart of our work as we continue to strive to define innovative ways for our students and staff to engage with the best institutions of the world and to share our resources with them. To this end, Boğaziçi University has in the recent years stepped up its efforts to further its connections with the larger community and society at large. Ensuring the continuity of Boğaziçi University’s culture, where the values of accountability to the public and egalitarian involvement prevail, requires developing active ties with, and nurturing sustained contributions from, our alumni and friends. And when it comes to the quality of its alumni, as is evidenced here tonight, Boğaziçi University should not and cannot be humble, as its alumni are at par with those of the best institutions of the United States. We believe that our vision of a ‘strong alumni-backed public university’ must be and will be welcomed by our community here.”

Indeed, as she predicted, alumni response to the dinner was overwhelming, far exceeding expectations and indicating the commitment U.S. alumni feel towards their alma mater. In order to accommodate as many alumni as possible, the University Club’s Main Dining Room was filled to over-capacity, seating more than 400 people in a space that normally allows for a maximum of 360 seated guests. Alumni desire to attend was so high that a waiting list was started for the gala dinner well before the final RSVP deadline. During the “live-pledge” segment of the evening, both its alumni and its friends continued to show their solidarity with Boğaziçi University by contributing an unprecedented 50,000 USD in just over half an hour.

President Barbarosoğlu’s very well-received and emotional speech was followed by remarks from the great-great grandson of Cyrus Hamlin, the founding President of Robert College, Dr. Edward Widmer of Brown University, CEO and President of the Foreign Policy Association Mr. Noel Lateef, and CEO and President of the Pepper Financial Group, Mr. John Tognino. The gala ended with dancing to the tunes of the Mike Herman Band, one of New York’s finest and hippest musical groups.

The 150th Year Gala Dinner at the University Club played an essential role in strengthening Boğaziçi University’s ties with its U.S. alumni, revitalizing the emotional bonds between the institution and its former students. Perhaps this was the most successful accomplishment of all the events in NYC given the importance that President Barbarosoğlu has placed on reaching out to Boğaziçi alumni since the start of her tenure.