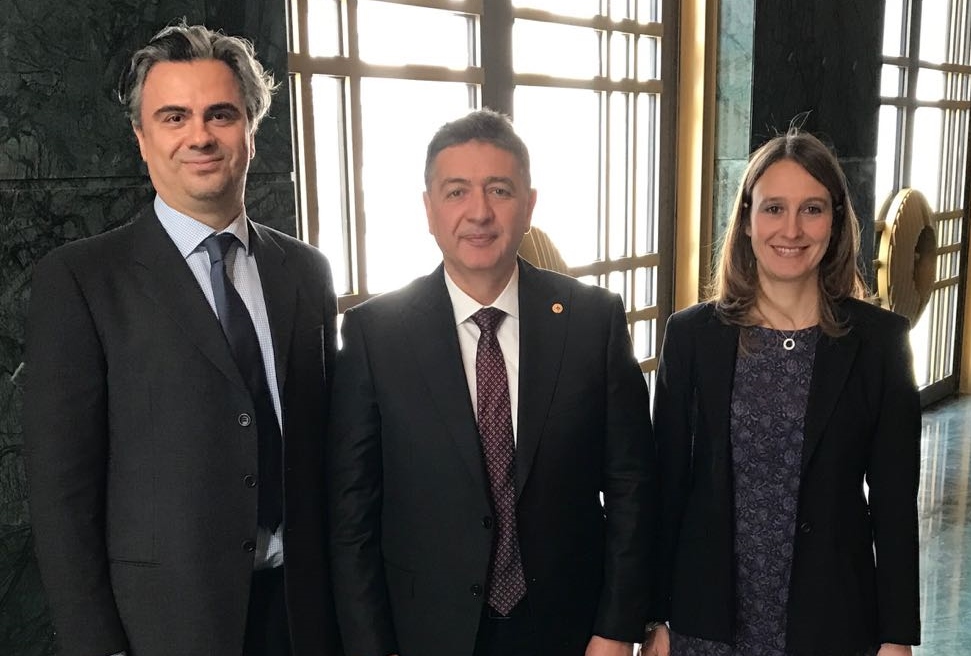 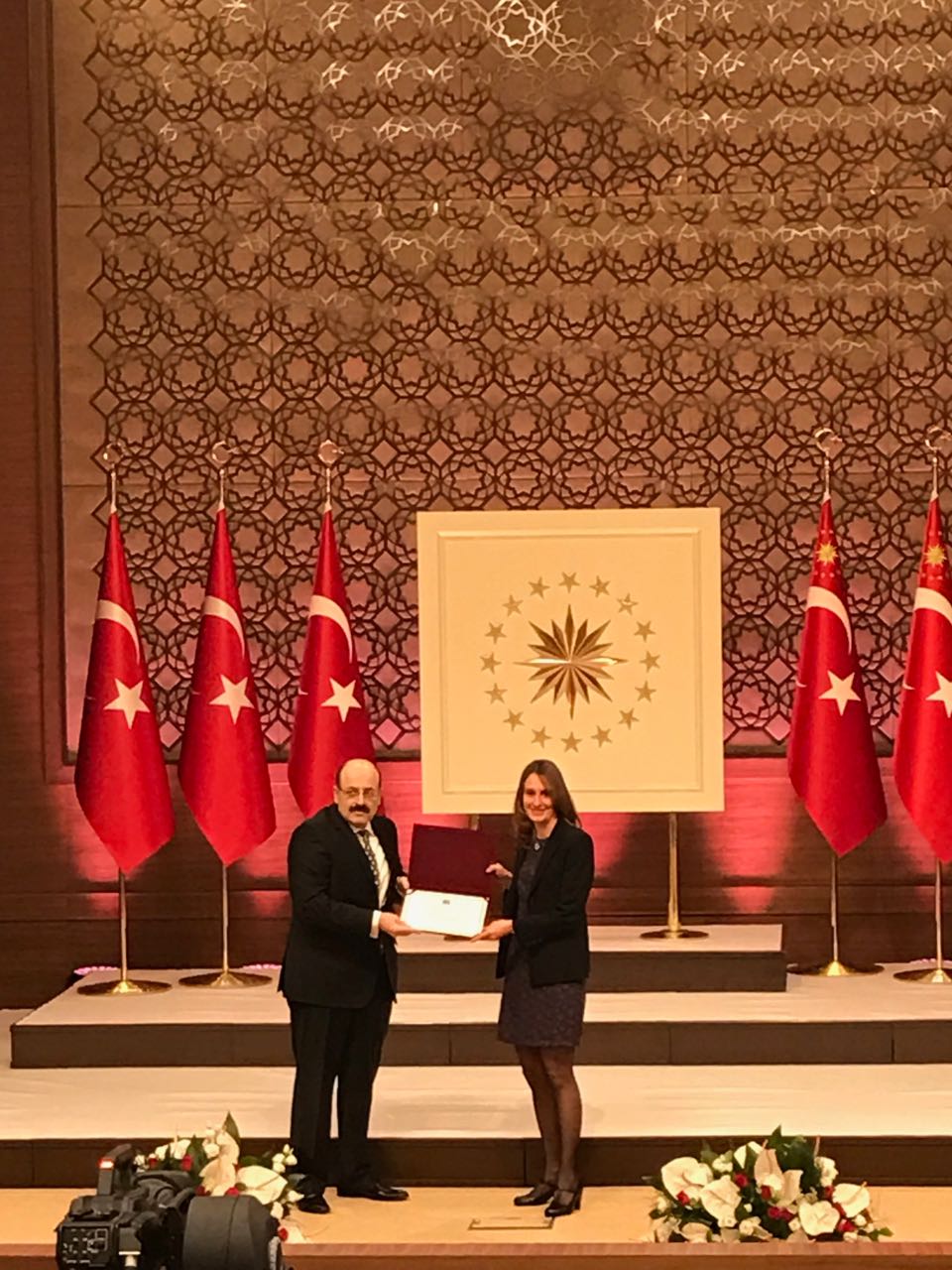 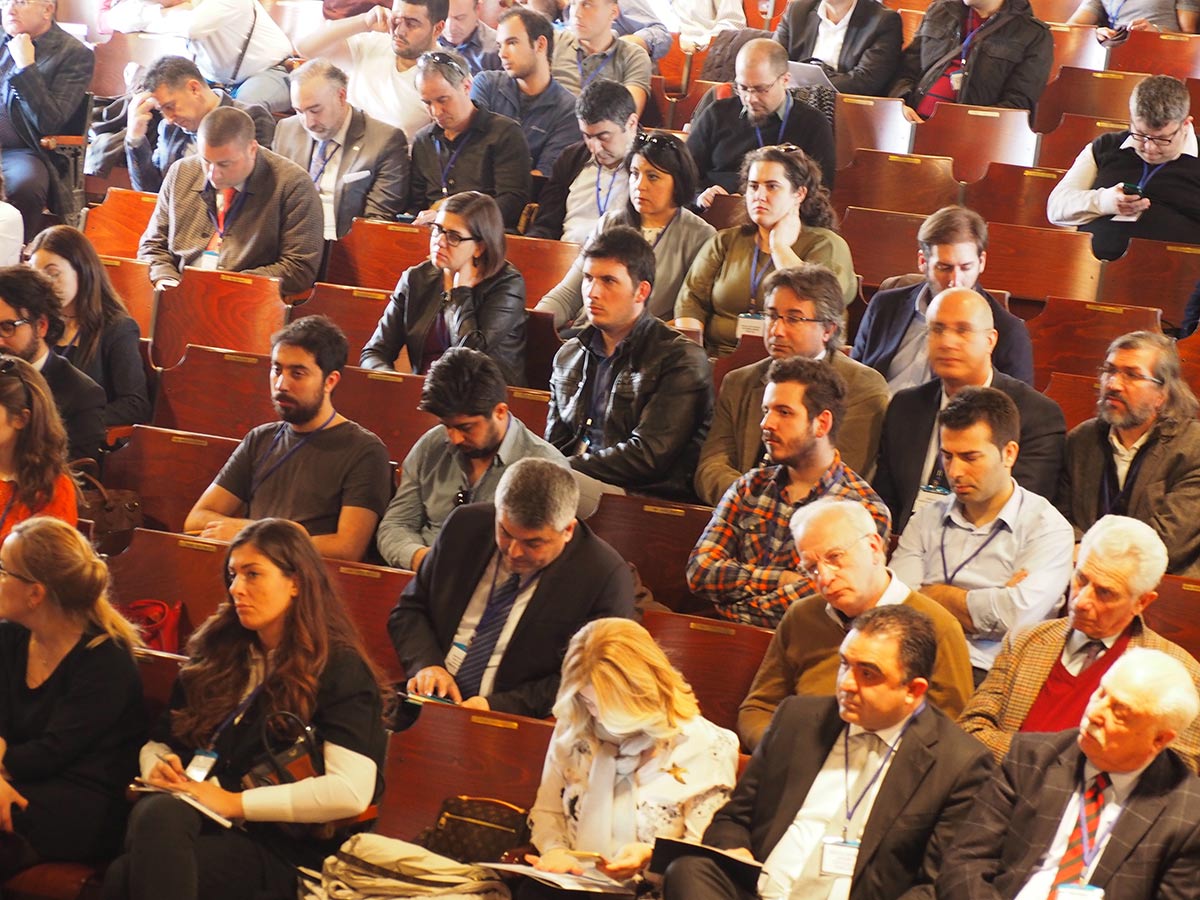 TUBA “International Academy Prizes” have been awarded since 2015 to outstanding scientists in three fields: Health and Life Sciences, Basic and Engineering Sciences, and Social Sciences and Humanities. This year’s awards were presented to their owners at a ceremony held at the Presidential Palace on February 1, 2017.

Tınaz Ekim Aşıcı of the Department of Industrial Engineering was conferred the “Outstanding Young Scientist Award” (GEBİP) while Hilmi Luş, a faculty member at the Department of   Civil Engineering received the “Best Authored and Translated Books Award – Mention” (TEÇEP) for his translation into Turkish of the book titled Dynamics of Structures:  Theory and Applications of Earthquake Engineering (4th Ed., Global Ed. 2014).

President Professor Mehmet Özkan participated in the award ceremony and offered his congratulations to Tınaz Ekim Aşıcı and Hilmi Luş.

Hilmi Luş completed his undergraduate education at Istanbul Technical University (1995) and received his M.S. and PhD degrees from Columbia University, New York (1996 and 2001, respectively).  Luş has been a faculty member at the Department of Civil Engineering of Boğaziçi University since 2002.

TUBA International Academy Prizes, the first international science awards conferred in Turkey, were presented to the recipients by President Recep Tayyip Erdoğan.  The Academy Prizes comprise an Academy Medal, $30,000, and an Award Certificate.  The recipients of this year’s Academy Prizes were Şerif Mardin, world renowned sociologist and faculty member at Istanbul City University, in recognition of his work on modernity and religion, ideology and civil society, center-periphery and neighborhood-school relations in Turkey (Prof. Cengiz Kellek from Şehir University received the prize for Mardin);  Prof. Marie-Claire King of the University of Washington for her work on the breast cancer gene; and Prof. Omar M. Taghi of the University of Berkeley, California, Department of Chemistry, in recognition of his work on metal-organic frameworks (MOFs).

Since 2001, TUBA has awarded GEBİP Awards to 31 scientists under the age of 39, from 19 universities.  The GEBİP Award provides 20,000 TL per year in financial support for 3 years; it also includes an additional 6,000 TL for doctoral students at the dissertation stage of their work.  “Best Authored and Translated Books Awards” (TUBA-TEÇEP) are given for 6 books in the fields of Nature, Engineering, Health and Social Sciences. The grant is 20,000 TL for Best Authored Book, and 12,500 TL for Best Translated Book.  On the other hand, recipients of Outstanding Authored Book Award (Mention) receive 7,000 TL and those of Outstanding Translated Book Award (Mention) receive 4,000 TL.