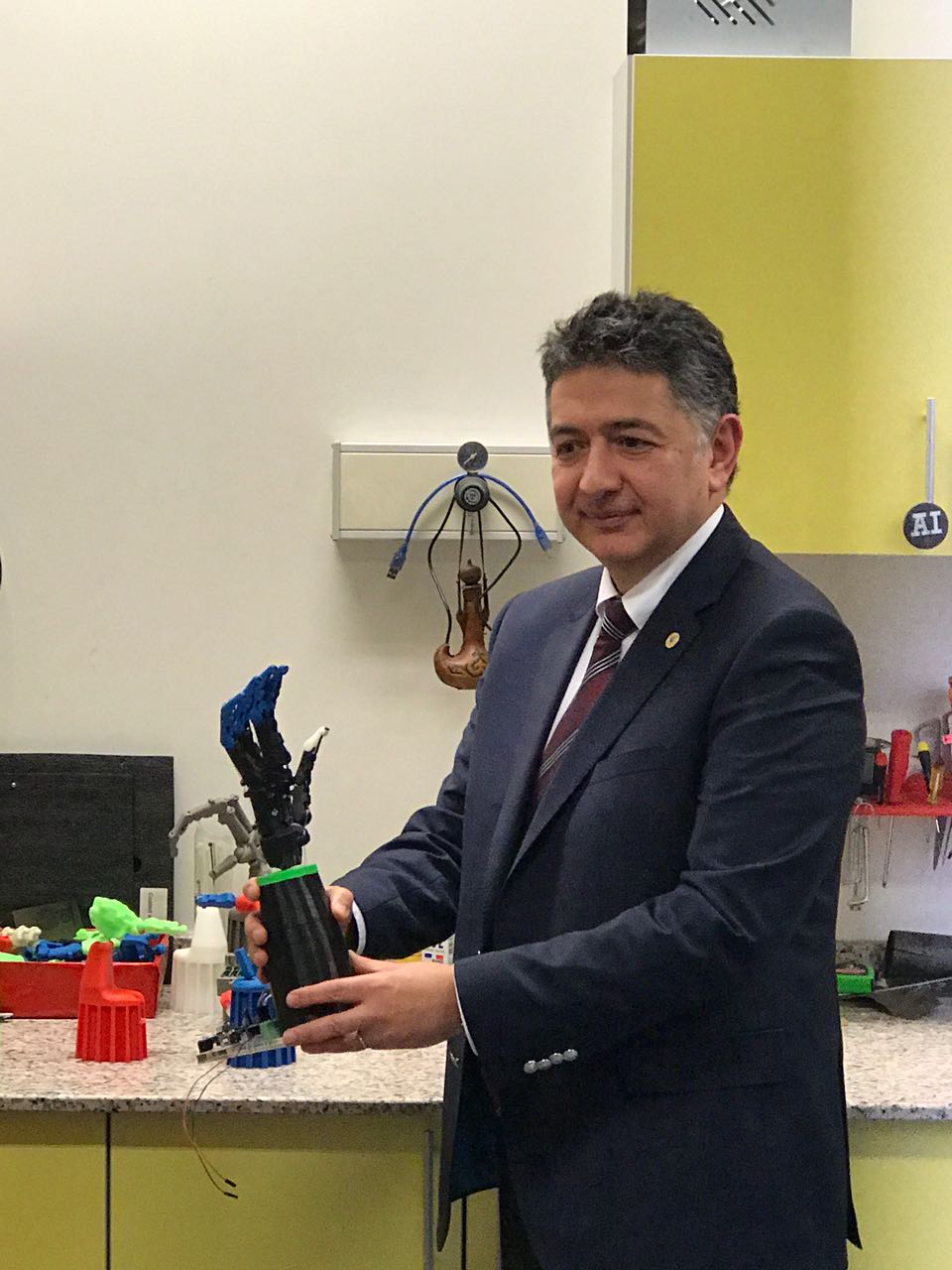 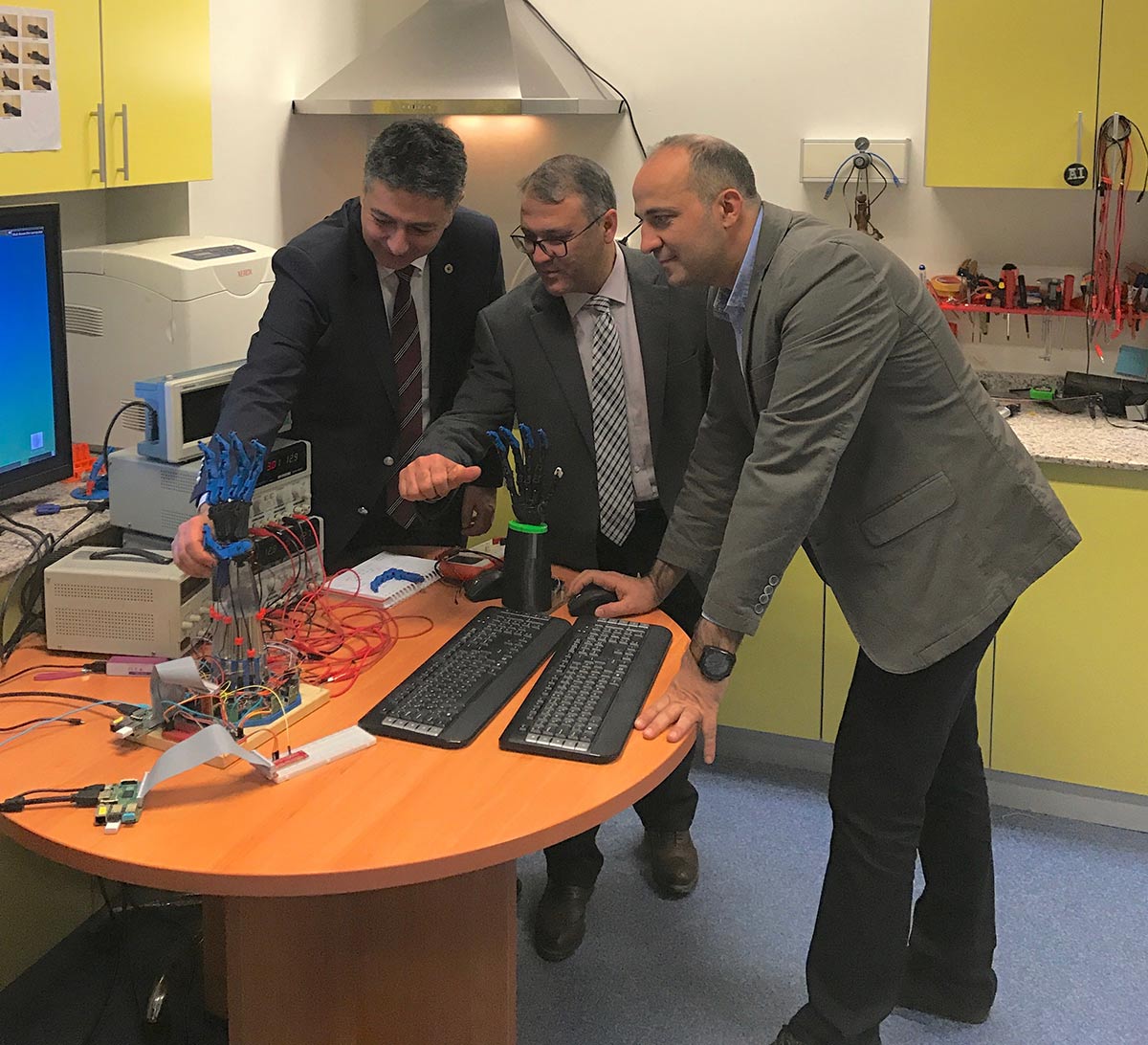 An anthropomorphic robotic hand being developed at the Biomedical Robotics Laboratory of Boğaziçi University has the functions and capabilities of the human hand and as such, is a first in Turkey.  The project is supported by TUBITAK 1001- Support Program for Scientific and Technological Research Projects.

A team of experts in the fields of orthopedics, surgery and mechatronics led by Professor Mehmed Özkan, Rector of Boğaziçi University and faculty member at the Institute of Biomedical Engineering, has been working on this project for three years.

Professor Mehmed Özkan pointed out that Prosthetic Hand and Robotic Hand technologies have become an important research and development field in recent years and added that the “anthropomorphic robotic hand” they are developing was inspired by human anatomy.  For the first time in Turkey, the project totally relies on national resources.

Explaining that R&D work on prosthetic limbs have a lot in common with robotic technologies, Özkan said that their aim was for the anthropomorphic robotic hand to duplicate human anatomy, and that they were indeed developing a medical device that patients would be able to use much more comfortably.

A highly individualized prosthetic hand can be designed

Prof. Özkan went on to explain their work:  “For this project, we closely studied the anatomy of the human hand and using current technology, designed a model that is as humanlike as possible.  We used a three dimensional (3D) printer in the mechanical production of the prosthetic hand.  Using a 3D printer provided us with an enormous advantage in that we were able to test various designs on the model.  We believe that 3D will also enable us to use a patient’s anatomic data to design a highly individualized prosthetic hand.  The commonly accepted function tests and simulation analyses conducted on our prosthetic hand have been completed successfully. Now our objective is to move on to the clinical stage of a model that duplicates human anatomy to help patients who have lost a hand, or the functions of the forearm, to regain these functions.

Prof. Özkan continued, “One of the functions an amputee loses is the sense of touch.  Yet the sense of touch is only one of the important functions.  Controlling the motions of the hand is a major challenge in itself.  In the hand we developed, we are trying to recreate the movement functions of a real hand by transforming the signals from the nervous and muscular systems into control commands.  In doing this, we use algorithms also inspired by biological nervous systems.”

Özkan pointed out that the prosthetic hands on the market provide considerably limited dexterity because they do not fit the patient’s anatomy.  Patients using them experience various problems such as difficulty in performing natural hand movements as well as  difficulties caused by the weight of the device or its batteries.  The Anthropomorphic Robotic Hand developed at BU is expected to overcome these problems as its design is very similar to the anatomy of the human hand.

Underlining the inherent complexity of the mechanics of the human hand, Özkan stated that he and his team were trying to solve this mechanical complexity and design a hand that is very close to human anatomy.  In this context, instead of using a motor to move the fingers, they prefer to establish links between the fingers to move the hand.

Explaining that the prosthetic hand being developed at BU can easily perform gripping, grasping and opening functions, Özkan continued, “The fingers of the human hand have approximately 24 different axes of movement.  Existing prosthetic hands only have around 10, which is very low.  We have identified the movements that comprise the movement functions of all fingers.  Among them are gripping, opening, and grasping functions.  Our target is to give fingers complete freedom of movement.  In our model, the hand receives signals through 8 channels.  Using artificial nerve networks, an algorithm interprets these signals.  The algorithm perceives these signals, just like in the normal physiological system, analyzes them, determines the movement intended, and transmits them to the finger. However, we target a level where the nerves are directly linked.”

Özkan said that they aim to take their work to the next stage rather than settle for the procedures used in some leading research centers around the world.  In the following stages of the project, their objective is to surgically attach the prosthesis to the arm and thus achieve a structure that is integrated with the human nervous system.  Prof. Özkan explained that the whole process, from conceptualizing the idea for the prosthesis to putting it on the market, takes about 8 years. In the next three years, Prof. Özkan and his team will be working on developing a prototype of the device that patients will be able to use.