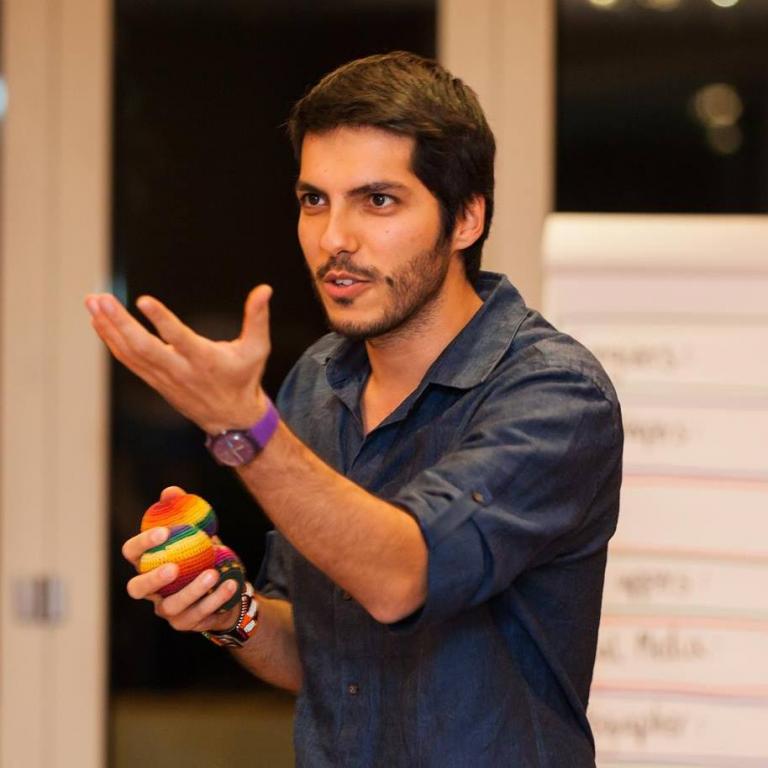 Ömer Ongun graduated from Boğaziçi University’s Management Department in 2011.  He has been working on an international project named NOW for nearly a year, with his teammates from seven different countries. Ongun told us that he wants to carry the colorful, multivocal atmosphere of Boğaziçi University to the NOW project, a project designed as a learning program for young people.

Ömer Ongun currently works at Turkish Cultural Foundation/AFS Intercultural Programs as educational director.  His interest in designing a project for young people dates back to his high school years.  Having lived abroad first through AFS during his high school years and later through the exchange programs at Boğaziçi University, he and his teammates at NOW aim to enable young people who do not have the opportunities they did to experience different, diverse worlds, other than the culture they grow up in.  Ongun was involved in intercultural studies throughout his years at Boğaziçi University; he received his Master’s degree on strategic communication at Galatasaray University, focusing on intercultural communication.  Two years ago, he got together with his current teammates, and they have been working on NOW since July. They have raised 60 to 80 thousand Euros in the five months since they started working on the project.

Ömer Ongun talked about NOW for the readers of News from Boğaziçi.

What is the NOW project?

NOW is a 6-month learning program geared for young people between the ages of 18 to 25.  People always tell young people “Grow up first”, or “You’ll do it when you grow up.”  In contrast, we tell them “Don’t grow up, do it now” or “Social change, NOW”.  We will select 30 young people from the applications we received from Europe and Africa and will start our first learning program in June.  Applications are still coming in.  First, we will offer an online education program that will last until the end of July. Then we will bring the participants together in Switzerland and put them through a 10-day training program. The program includes issues like respect for differences, global education, human rights and democracy; during that time we will also work on bringing out their passions and wishes in life, in an effort to make them stronger individuals.  While in Switzerland, we will ask each participant to select a partner.  We will use the funds we created in the 4th and 5th months of the project to send them to visit their partners for a week. That will increase personal contact between the participants and give them a chance to experience each other’s lives.  We will ask them to design a social responsibility project during those visits. At the end of 6 months, we will have an event we call Future Forum to bring all the participants who are actively working together one more time, to share their experiences: what they learned, what they experienced, how they will go on from now on. Meanwhile, the second 6-month program will begin and a new group will be formed. For continuity, we need to guarantee our programs for at least three years.   We will hold the program in Turkey in 2017 and in Latin America in 2018.  We started promoting the program and searching for resources in January.  Besides small donations, we receive European funds and corporate donations too.

All around the world there are programs for young people, ranging from exchange programs to educational programs.  How does your project differ from others?

We asked ourselves the same question while working on the project:  We want to develop something but how will it be different from others?  At that point we realized that in all the programs and conferences for youth, older people tell things to young people, give them advice.  We thought this slowed down the young people and kept them quiet.  We want to have a non-profit platform that young people have developed for young people.  We will learn together in Switzerland; we are part of the group as facilitators.  Another point we observe in many education programs is that project development is encouraged but there is no follow up.  We tried to solve this problem by extending NOW to 6 months.  One more point needed to be considered: people who participate in these kind of activities are usually from good socioeconomic backgrounds, have strong access to knowledge, have no physical disabilities, and are from similar social classes. In contrast, we wanted to create the opportunities that we have had for people from different segments of societies, people who have no chance of access to knowledge.  We are trying to translate the application forms to as many languages as possible. We want to focus on what is happening in the world and what we want to do; we want to remove the barriers to participating in the event.

Those who participate in NOW will pay whatever they can.  We are in contact with many NGOs and activists from all around the world.  For example, we work with Mardin Cultural Association in Turkey.  They work with young people and women around Mardin and vicinity and reach people that we cannot.  We have contact with an association working with young people with disabilities in Ankara.  At the same time we are in communication with a structure established by young Muslims in Europe; we also keep in touch with an association that brings together proponents of peace who are against the Israeli-Palestine war under the same roof.  Since each young person has a different area of interest, we are trying to get in touch with as many and as diverse associations and formations as possible.

You have an international team.  How did you get together?

We met at a conference two years ago and began sharing our ideas.  We are eight activists from eight countries; we all have different lives.  We are different people who have different skills, talents and interests.  One of our friends is an environmental activist in Rio, another one is a social entrepreneur in Zurich, and still another is a computer engineer in Argentina.  We also have a support group of 20 to 25 people.  We text and e-mail each other daily, and Skype once a week.

Can you talk about the details of the 10-day program in Switzerland?  What kind of projects do you expect from your participants?

In our team of eight, we all have different competences so we will be the instructors in the program.  At the same time, in Switzerland we will invite instructors from teams that share our values and support our ideas, or from NGOs we have been in touch with.  The projects that will be designed will depend on the personality and culture of each participant.  Rather than considering the problems in the world separately, we need to consider them holistically.  We want the young people to see that the local problems they experience in their countries are actually global problem.  We think we will have more projects that focus on diversity and empowering the young people.

Do you have any other plans beyond the 6-month program?

Do you think the years you spent at BU had any effect or contribution on this project?

For me, Boğaziçi University is a model by itself.  Boğaziçi has a campus that brings together different people from different segments of society, from different cultures. I studied in an environment where people existed with their own identities, their own cultures and ideas, and turned this experience to a positive value.  Such opportunities are rare in Turkey and abroad.  I thought we could create the campus environment at NOW.  I wanted to carry my personal experience to different places.