10 Students from Boğaziçi University Made A Difference at the CGIU Summit with their Social Responsibility Projects (May 11, 2016) 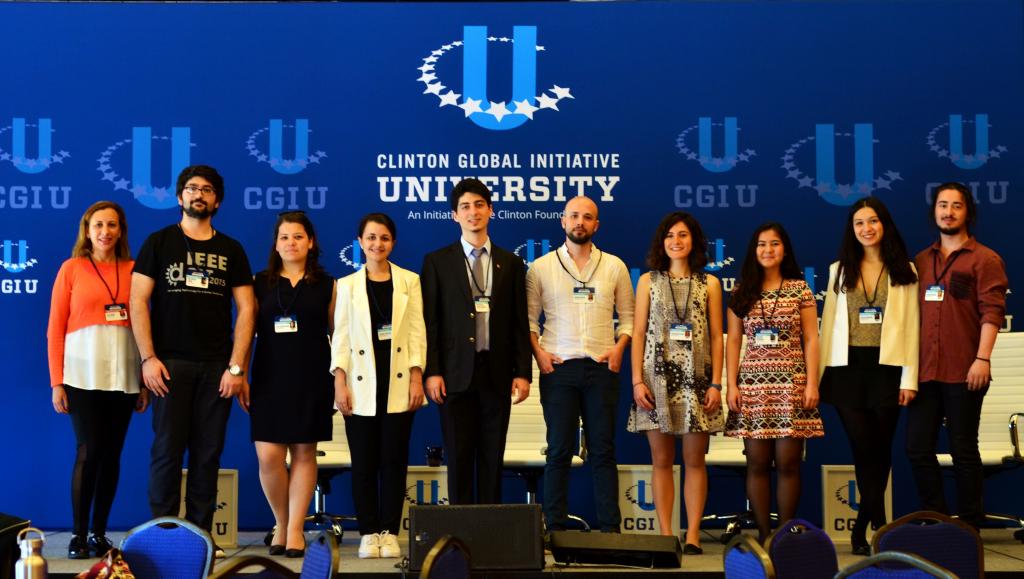 Established by the former American President Bill Clinton in 2007, CGIU has been bringing together students who develop social responsibility projects from all over the world for eight years. On basis of the principle of “Commitment in Action”, CGIU enables students who have projects on social responsibility on such issues as education, environment and climate change, peace and human rights, eradication poverty and public health to get together at an international platform.  The students get a chance to meet people who have different projects and to find investments to help them turn their projects into practice.

Students from Stanford, Yale, Berkeley, and MIT were also among the participants of the event this year. Boğaziçi University sent eight students with five projects, and two students attended the Summit by their own means and presented their projects.

Elif Gizem Kain of the Psychology Department participated in the Summit with her project aiming to enable children of Syrian refugees to benefit from vaccination services; and Özgecan Yazar and Melike Merdan of the Economics Department with their project titled “Bubble Sustainable” aiming to increase sustainability of Boğaziçi campuses.  The project of Mahir Yazar, PhD student at BU Institute of Environmental Sciences was based on designing the lifecycle of products procured for the health clinics on Boğaziçi University campuses so as to prevent damage to the environment, ensuring a green procurement cycle for those products and ultimately a green economy.  Mustafa Doğan and Melikşah Çakır of the Economics Department, on the other hand, took part in the Summit with a project named “BUton”.

Another project presented at the Summit was developed by Tarık Ozan Erkovan of Guidance and Psychological Counseling Department and Gizem Dikdere from the Industrial Engineering Department.  Their project was based on equipping a movie theater with the infrastructure that is necessary for individuals with a visual handicap to view a film by means of Visual Description.  The project aimed to allow individuals with visual disabilities to view the same film together with the rest of the audience in the same movie theater. The project was one of the fundamental points of Boğaziçi University’s new movie theater SineBU, which was inaugurated last year.

Başak Şıklar from the Civil Engineering Department participated in the Summit by her own means and presented her project on the selection of material in the construction of green buildings that will minimize the damage to the environment. Ayça Yağışan of the Management Department also attended the CGIU Summit by her own means.  Her project, designed in collaboration with Young Guru Academy, was based on an education program to develop children’s leadership abilities.

We talked to two participants about their social responsibility projects developed at Boğaziçi University.

Mustafa Doğan and Melikşah Çakır explained that the BUton project was prepared in collaboration with Boğaziçi University’s Committee for Preventing Sexual Harassment.  The project enables the individual who is being sexually harassed to inform his/her friends of the event and his/her location. In case of any danger, people can send their location to their friends, by waving their telephone. 700 people currently use the application, which can be downloaded from AppStore and Google Play. Doğan referred to the contribution of the University during the development stage of their project, and even during its presentation at the Summit, adding that Boğaziçi University was the only university from Turkey to participate in the Summit.  Doğan and Çakır enjoyed having an opportunity to see the projects of other students and get feedback on their own project, which had been an invaluable experience for them.

On the last day of the Summit the students helped paint a school building; they said that it gave them the chance to actively participate in a social responsibility event.