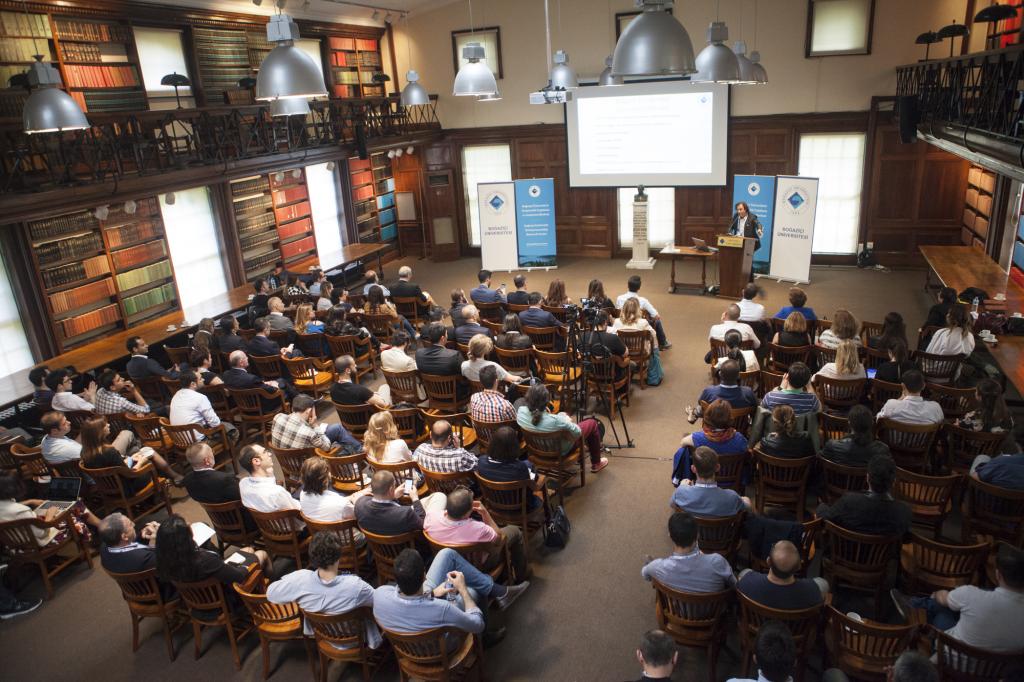 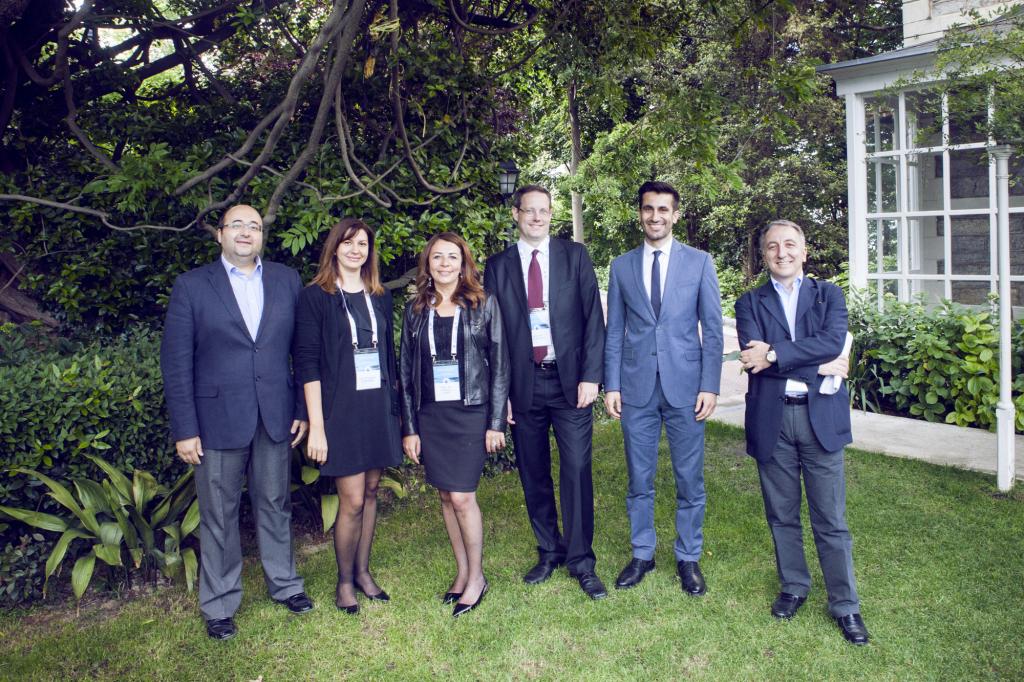 Boğaziçi University, one of Turkey’s most prestigious universities and a perfect example of entrepreneurship just by the story of its establishment, recently added The Entrepreneurship Applications and Research Center to its existing enterprises.  The Center started its activities with an event bringing the business world together with entrepreneurs.  Students, alumni, entrepreneurs, and corporate firms gathered at the Center.

Boğaziçi University announced the inauguration of the Center to students, young alumni, entrepreneurs, and corporations.

Prof. Stephan Koch of the Faculty of Economics and Administrative Sciences, Head of Management Department, and Assistant Professor Oğuzhan Aygören of the International Trade Department assumed the administration of the Center. The guests at the event included well known entrepreneurs and Boğaziçi graduates Nevzat Aydın, founder of yemeksepeti.com; Veysel Berk, founder of Çaycı and evebirilazım.com; and young entrepreneur Yasin Sert, who is known for his recycling brand, Chapputz.  They told their success stories to the audience. Nevzat Aydın’s promise to provide all kinds of support, moral and material, to the Center and his call to the business world and alumni to do the same was met by enthusiasm.

In his inaugural speech, Prof. Koch stated that their aim was to develop the resources needed to activate the Center through awareness raising and training programs, and said that the Center would become a platform that would build bridges among all the resources necessary for creating value for the ecosystem. He went on to say, “We defined our objective as raising the awareness of everyone about entrepreneurship, from our students to the business world in particular.  This requires many initiatives on education, research, production of knowledge and individual support.  Entrepreneurship training is a must for the development of new enterprises and entrepreneurship.  However, how this training will be given has to be carefully studied.  Therefore, we want to be pioneers not only in training, but also in the production of knowledge that will contribute to the whole ecosystem.  Thus, our work at the Center will seek answers to such questions as “Why do some people have a talent for catching and creating opportunities while others fail to do so?  Why are some people successful in transforming their business ideas and dreams into reality and others aren’t?  What can we learn from the stories about successful and unsuccessful enterprises?  How do long-established institutions work effectively and productively with internal and external entrepreneurial structures?”  At the end of his speech, Prof Koch stated that the Center would collaborate with outstanding international and local universities, non-governmental organizations and public institutions.

Prof. Ayşegül Toker, Dean of the Faculty of Economics and Administrative Sciences and Chairperson of the Center’s Board of Advisors referred to Boğaziçi University’s significance for Turkey and its potential in entrepreneurship.  Timuçin Bilgör talked about the benefits that the new Business Angels Investor Network of Boğaziçi University (BUBA) provided to entrepreneurs.

“Turkey is a heaven for entrepreneurs”

Taking the stage to represent this potential and young entrepreneurs, Yasin Sert, a student in the BU Political Science and International Relations Department, emphasized the support that he had received from BU for his recycling project, Chapputz.

The founder of yemeksepeti.com, Nevzat Aydın, referred to the impact of the atmosphere at Boğaziçi University on him as a student and on the success of his business.  Veysel Berk told the audience that while he was a Ph.D. student in the United States, he had developed a microscope that could detect the entry of disease causing microbes in the human body and had made a name for himself in the international business world.  He then explained how he had created the brand name Çaycı when he returned to Turkey a year and a half earlier. “With its authentic problems, Turkey is actually a real heaven for entrepreneurs,” said Berk before ending his speech.

Assistant Prof. Oğuzhan Aygören made a comprehensive presentation on the Center’s role, mission and purpose, and talked about the fundamental elements of the culture of entrepreneurship, reminding the audience that courses on entrepreneurship had been included in the academic syllabi since the early 2000s.  He also talked about the BU Inovita Health Technologies Incubation Center (Life Sciences and Technologies), the HayalEt Incubation Center within the framework of the Technology Transfer Office, the Entrepreneurship Competitions of İşteBU, the Enterprize Contests organized by the Economics and Management Club (IK), the Finance Technopark, and the BUBA Business Angels Investor Network, Innovation and Entrepreneurship Distance Learning Certificate Program designed by Boğaziçi University and the Innovation Center as the outstanding indicators of the significance that Boğaziçi University attaches to entrepreneurship.

“At this Center we want to pave the way for innovative corporations that can compete in the world markets to leave Turkey,” said Aygören. “This center will not be a first among such efforts, but it will enhance the work of existing structures and integrate them with Boğaziçi values.  Therefore, we want individuals and corporations to transform Boğaziçi University’s competitive advantage to their own advantage. We believe entrepreneurship is a mindset.  Those who possess this mindset can question the status quo, observe, catch opportunities, try, fail, learn and create transformation, in whatever environment they are in.  And while doing that, they focus on creating long-term values and sustainability.  We aim to bring out and share more stories that will inspire and encourage more people to achieve that mind set.”

Explaining that they had defined the Center’s target audience as Boğaziçi University students and alumni, entrepreneurs and corporations, Oğuzhan Aygören continued, “We aim to inform and raise the awareness of students and young alumni on entrepreneurship through awareness programs.  Film screenings, seminars, training sessions, role models, and case studies will be important elements of this program.  For entrepreneurs, we aim to create a systematic network of people and to serve as a market place particularly at the stage of team formation.  Looking at successful enterprises, we see that teams composed of people from different disciplines have more chance of success.  Therefore, we invite entrepreneurs outside the university to find founding partners for themselves at Boğaziçi University.” Aygören said that another target audience was corporations, adding that they were currently working on programs to enable corporations and entrepreneurs to collaborate on developing new products and services.  He ended his speech with a call to the audience:  “I invite you to support Boğaziçi University, which is home to students with the highest potentials in a country with limited resources. In turning this potential to reality, the support of you, our valuable alumni, and the outstanding names from the business world will give us strength.  We are grateful to everyone who shares and supports our common dream and vision.”

For more information on the Center and the Center’s activities: girisimcilik.boun.edu.tr