Boğaziçi University Sends Off its 149th Graduates to a Bright Future (June 23, 2016) 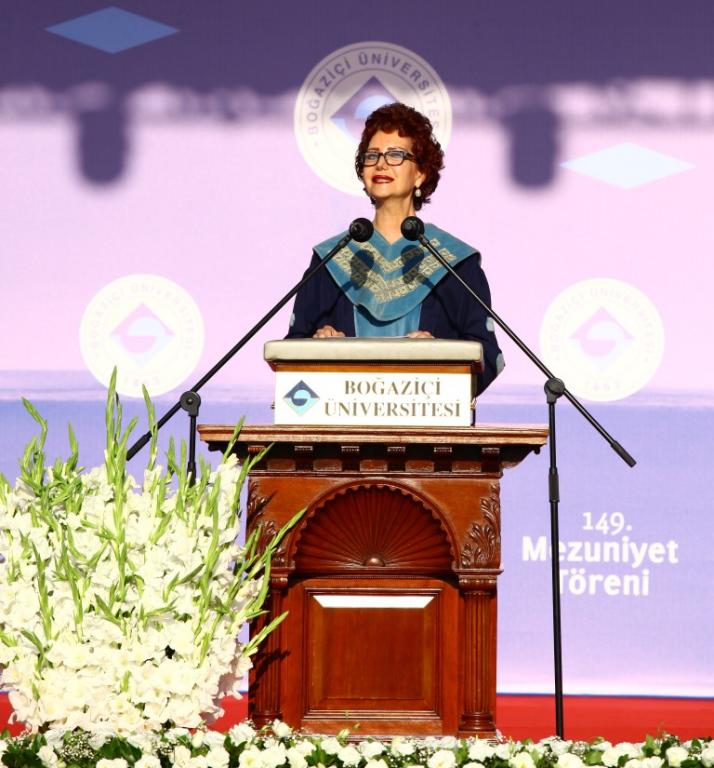 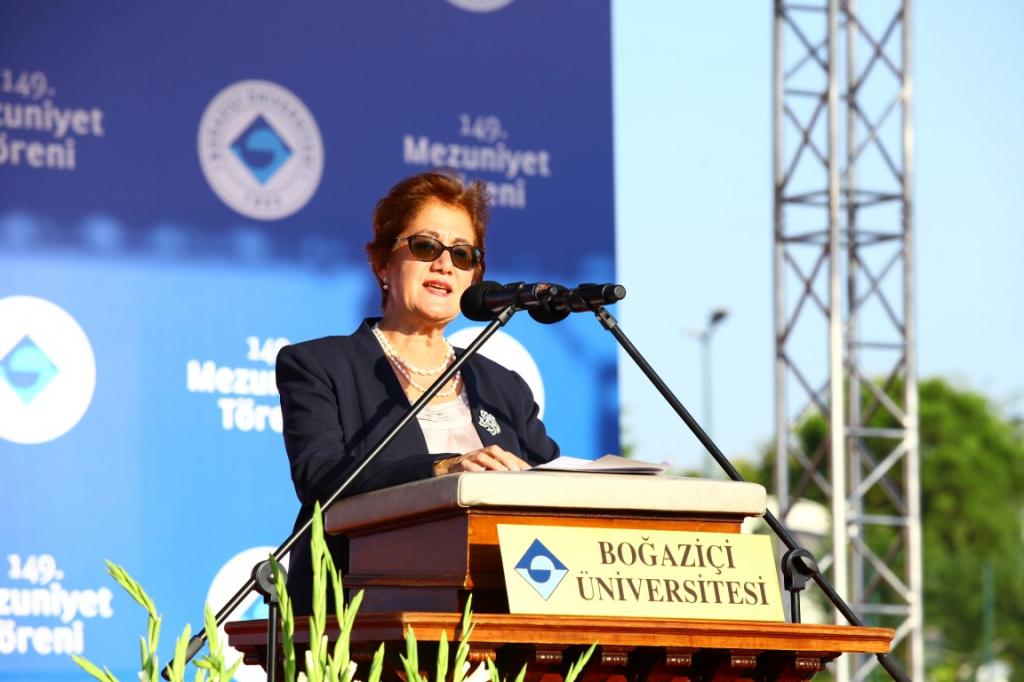 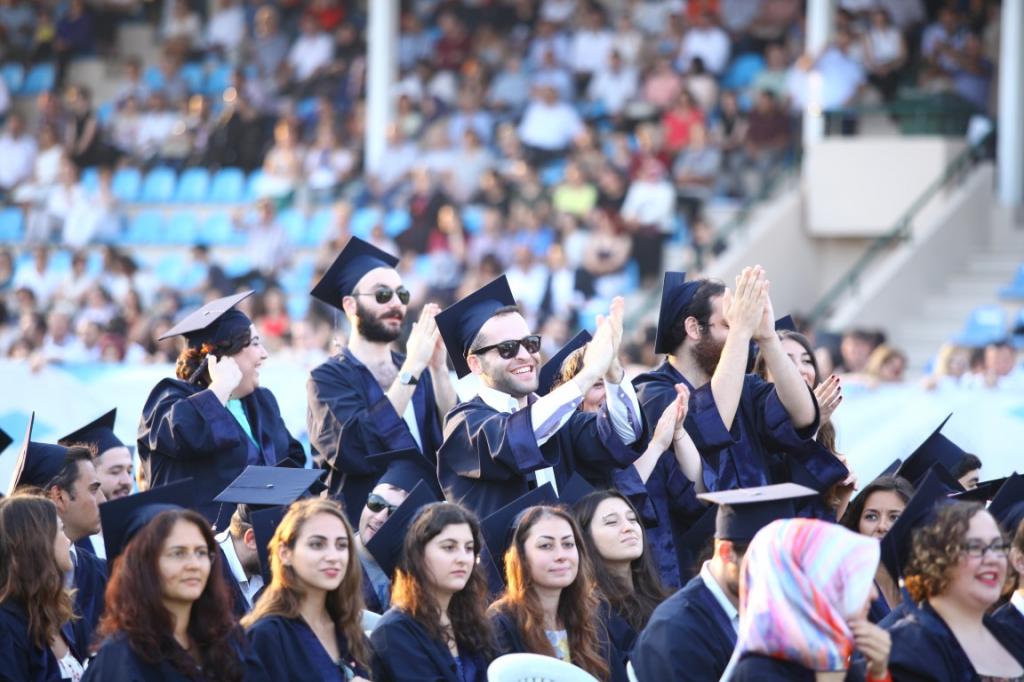 Boğaziçi University’s 149th Commencement Ceremony was held on 22 June 2016 at the Uçaksavar Sports Complex.  The guest speaker at the ceremony was Ayşe Cihan Sultanoğlu, Assistant Secretary General of United Nations and Assistant Administrator and Director of the Regional Bureau for Europe and the Commonwealth of Independent States (RBEC) of the United Nations Development Program (UNDP), selected as one of the most influential Turkish women in the United States.

“Universities are windows that open to the universe”

In her opening speech, Prof. Gülay Barbarosoğlu, President of Boğaziçi University, said, “Since 1863, Boğaziçi University has educated many successful, creative and responsible generations like yourself, always striving to give back to society three times what it received. During all this time, freedom and openness have been two of the most important principles that determine the stand and perspective of this university.  As I said in the first commencement ceremony speech I delivered as President four years ago, with all their colors, voices and pluralities, universities are windows opening up to the universe.  Even though times and people have changed, Boğaziçi has been able to unite its teachers, students and alumni in the effort to open up to the universe and universal knowledge.  Thereby independent thinking and scientific criticism have held a focal point at Boğaziçi and the academic tradition nurtured by those who have no fear of knowing the unknown, telling the untold, and writing the unwritten has been transferred from generation to generation. The fundamental reason underlying this achievement is the fact that we value academic autonomy, scientific freedom, and independent thought as the fundamental values that make us “us”.

Explaining that for the sake of perpetuating the culture of democratic communication, the university has always allowed the practice of openness and freedom, within and outside the school, and has multiplied these values to the extent that they were experienced, Barbarosoğlu stated, “In this way our school has been able to stay out of unfruitful political conflicts. Boğaziçi University owes its ambition and strength to science and free thought and nothing else, and has never wavered from its objective of becoming better and attaining the truth.”

The guest speaker at the ceremony Ms. Ayşe Cihan Sultanoğlu is the Assistant Secretary-General of the United Nations and Assistant Administrator and Director of the Regional Bureau for Europe and the Commonwealth of Independent States (RBEC) of the United Nations Development Programme (UNDP).  Ms. Sultanoğlu called the young people to make their contributions to finding solutions to such global problems as inequalities, social alienation, conflicts, financial crises, refugee crises and mass migrations of nearly 65 million people, and climate change.  Sultanoğlu also referred to the issues of education and gender equality in her speech, stating that education was also the key to equality, development and peace.

Sultanoğlu went on to give some messages to the students.  “You have the chance to make the world a more livable place, a chance to leave a better place to future generations, no matter what career you choose — whether you work in the public or private sector, whether you work for an international organization or a nongovernmental organization, or in arts or in a totally different area.  What is of utmost importance is to have a purpose that will make you get up with great energy in the morning and start your work, a purpose that will allow you to achieve your full potential.  Whichever path you choose in life, you will definitely have the chance to make the world a better place not only for your children, and their children, but also for every single person on earth who is not as lucky as you are. Choose good role models for yourself.  Follow people who will support you on your path, who will give you strength at difficult times, who will share your happiness when you are successful.  Do not hesitate to ask questions.  And of course, as you advance in your career, make time to help those who are striving along the same path.”

The next speaker was Pınar Kartal, who addressed the students on behalf of the 2016 English Education Department graduates.  The ceremony continued with the speech of Murat Öngör, Director of the Alumni Association.  Öngör said, “You have become part of something that is as important as the academic knowledge you have acquired:  you represent the values that render us different, the values that have become an integral part of you. These global, indisputable values are the building blocks of this university.  We may have different opinions, but we are united to defend the free expression of every opinion.”

During the 149th commencement ceremony, awards were presented to students who distinguished themselves with their accomplishments in the areas of sports, culture, arts, and social responsibility in addition to their academic achievements.  This year, the President’s Award was given to Melis Kocakanat, who graduated with High Honors from the Economics and Management Departments concurrently and received a Double Major Diploma. She was presented with the Award for the outstanding leadership ability and team player skills she displayed and her activities in international organizations, in addition to her outstanding academic achievement.

Varol Ardil received the President’s Special Award in recognition of his volunteer work in social service projects, sharing the knowledge he has acquired. Ardil graduated with High Honors from Guidance and Psychological Counseling Department.

Muhammet Maşuk Şimşek, who finished Philosophy and Psychology Departments simultaneously with a GPA of 3.96, was the winner of Double Major Programs Award.  Enes Lukac, who graduated with High Honors from the Sociology Department, received The Most Successful Foreign Student Award for his work in international institutions and organizations on such issues as discrimination, racism and minority rights, in addition to his academic achievement.

The Mümin Tansever Club Activities Award is given to graduating students who have contributed the most to club activities at BU.  The recipients of the Mümin Tansever Club Activities Award this year were Büşra Erdoğan, a graduate of Guidance and Psychological Counseling and member of Social Services Club and Education and Research Club, who has participated in many social responsibility projects; and Onur Özkan Uzun, a graduate of Industrial Engineering Department and Head of Scuba Diving Club.

Achievement in Sports Awards were given to Zülal Akarsu, a graduate of Industrial Engineering Department, member of Sailing and Snowboard teams, who made significant contributions to sports events held at the university; and Mert Yörür, an Economics Department graduate and captain of the Basketball team.

This year the recipient of BUMED Special Award was Jülide Ateş, who has made significant contributions to Boğaziçi University, BUMED and to the protection of the university’s values.  The Award was given in recognition of her uninterrupted ties with Boğaziçi University and the Boğaziçi community, her volunteer work at fundraising activities to provide resources for the University, and the active role she played in events held at home and abroad.  Ateş graduated from English Language Education Department Program of the Faculty of Education in 1997.

The ceremony ended with the students throwing their caps in the air.