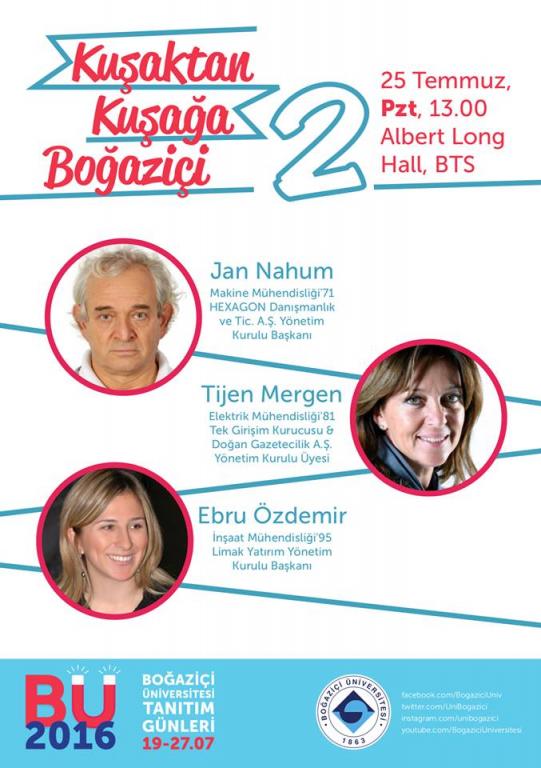 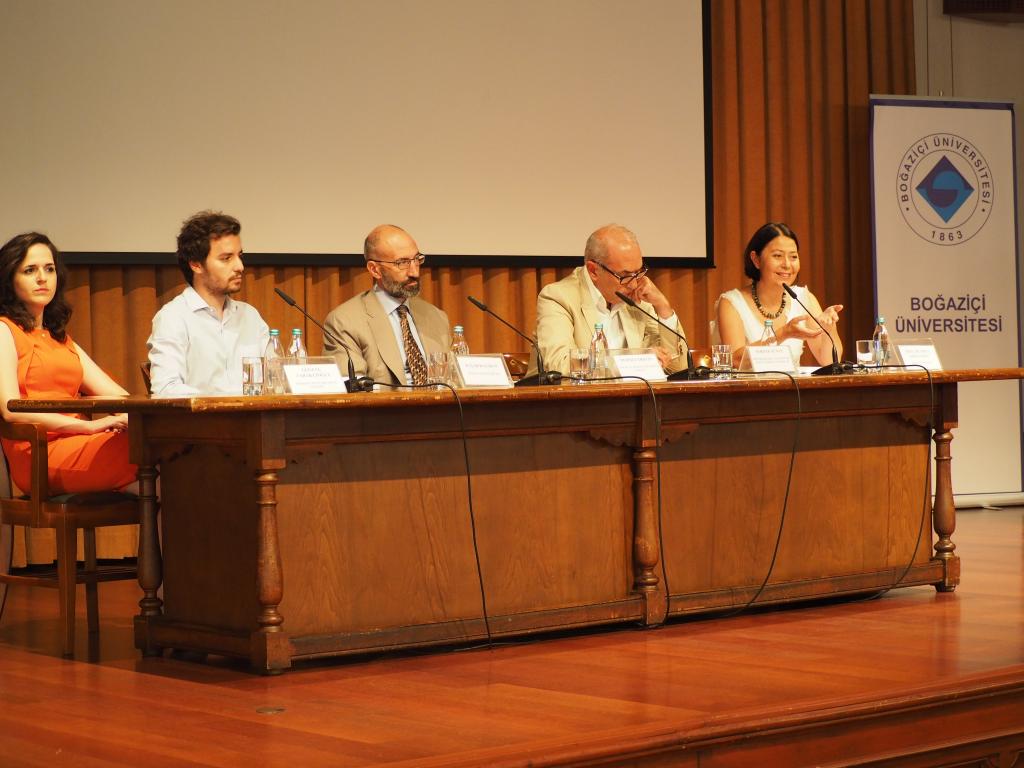 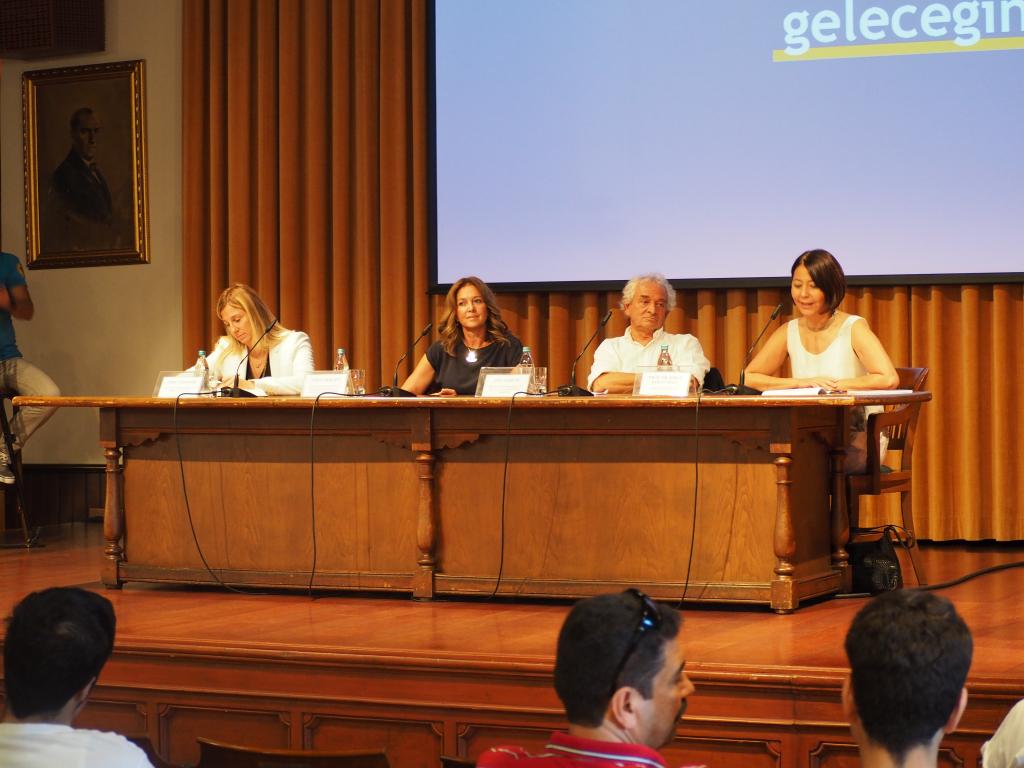 The “Boğaziçi from Generation to Generation” seminars were held within the framework of the 2016 Boğaziçi University Open House Program held between July 19-27. The seminars brought together Boğaziçi graduates who have successful careers with student candidates. In the first seminar held on July 22, the graduates shared their professional experiences with the student candidates and talked about what it means to be a member of the Boğaziçi community.  Among the participants were Serdar Sunay, Mehmet Erktin, Gönenç Tarakçıoğlu and Başar Başaran. Jan Nahum, Tijen Mergen, and Ebru Özdemir met with the students in the second seminar on July 25, and discussed the values that Boğaziçi University has been sustaining for generations.

In the seminar on July 22 moderated by Professor Biray Kolluoğlu, Dean of Student Affairs and faculty member at the Sociology Department, several alumni explained their reasons for selecting Boğaziçi University and talked about the turning points in their careers.  In her opening speech, Professor Kolluoğlu explained that a university was not just a place where you acquired a career; she underlined that “a university is a place where students gain a life style and a perspective, where they learn to engage in creative and critical thinking, and most importantly, where they ‘learn to learn’”.

The first speaker in the panel was Serdar Sunay (Management Department, 1978), Vice Chairman of the Board of Directors of Boyner Holding Inc.  Sunay began his speech by underlining what Boğaziçi University provided for students, and remarked that as early as the end of their first year at the University, students would feel how it had contributed to their development. Pointing out that Boğaziçi University and its heritage always made a difference, he remarked that leadership did not have a formula; his advice to each student candidate was: “Trust yourself”. Sunay stressed Boğaziçi’s success in producing leaders, and argued that this success could be attributed to the emphasis the University placed on extracurricular activities as part of the school spirit.

The next person to address the candidates was Mehmet Erktin (’86), Chairman of the Board of Directors of Omurga Construction and a graduate of the Civil Engineering Department.  Erktin emphasized once more the concept of “learning to learn”.  He discussed the many privileges of being a Boğaziçi University student, expressing that he had benefited from many career opportunities that came his way because he was a Boğaziçi graduate.

“Being a student at Boğaziçi is like playing football for Barcelona”

Gönenç Tarakçıoğlu (Electrical and Electronics Engineering,’07), R&D Director at Triodor Software, talked about the advantages of making informed choices.  Tarakçıoğlu commended today’s students for making conscious choices and emphasized how investing in oneself would carry the individual forward.  Referring to Boğaziçi’s tradition of educating leaders, he shared his own story with the candidates.  Tarakçıoğlu began his career in business when his thesis advisor offered him a job.  “Being a student at Boğaziçi is like playing football for Barcelona,” said Tarakçıoğlu, “the choices you make in life open up opportunities and lead you towards your target.”

Başar Başaran, a 2012 Industrial Engineering graduate and the founding partner of the Kunduz project, was the last speaker at the seminar on July 22.  Başaran began his speech by talking about his “adventure of self-discovery”, as he called it: his years at Boğaziçi, Erasmus, and his experiences in business life.  Stating that human beings are not one-dimensional, he went on to talk about the importance placed on student clubs and multidimensional development at Boğaziçi University. “At Boğaziçi, you are not affected by one department only,” he said.  “You are affected by the whole University.”   Before he concluded his speech, Başaran emphasized the value that Boğaziçi University attached to education outside the classroom and the opportunities that students were given to get it.

During the second seminar held on July 25, Jan Nahum, Tijen Mergen and Ebru Özdemir met with the student candidates and talked about their career paths and how their Boğaziçi education had been instrumental in shaping their careers.

Jan Nahum, a graduate of the Mechanical Engineering Department, told students that his career began in the Turkey of the 1960’s. At a time when there were few cars on the streets, he was a child who spent time thinking about how automobiles moved.  His interest in the automobile played a major part in his decision to study Mechanical Engineering at Boğaziçi University.  Nahum wanted to specialize in the automotive industry, and after finishing Boğaziçi University, he went to England and studied automotive design at the Royal College of Art. Upon his return to Turkey, he started his 35-year career as an engineer at Koç Group, where he held many important positions. Nahum said that he always benefited from the education he received at Boğaziçi, particularly at critical points in his career, in his achievements and the high-level positions he held.  “When you are equipped with knowledge and when you believe that you are doing the right thing, you become powerful in the business world,” said Jan Nahum, adding that he did not hesitate to challenge his superiors if necessary and defend what he knew was right. Emphasizing that Boğaziçi graduates were both well equipped with the right knowledge and also knew how to reach knowledge, he stated that such people could be more independent, do what they know is right and force their boundaries, adding that was how he always held high-level positions in the business world.  Nahum is still in the business world as an entrepreneur.

“Boğaziçi University teaches you to learn”

Tijen Mergen told the student candidates that she had dreamed of becoming an architect, but after visiting Boğaziçi University, she had become very impressed with the school and had decided to study engineering at Boğaziçi. After graduating from the Electrical and Electronics Engineering Department, she worked in many different areas in the sector. She described the work she carried out at Doğan Holding and expressed her happiness at being part of the team that created the social responsibility project aimed at female education called “Dad, Send Me to School”. Mergen underlined the vital importance of such projects as she had firsthand knowledge of the difficulties women faced in the sector.

The second seminar ended with Ebru Özdemir’s speech, herself a graduate of the Civil Engineering Department in 1995.  Özdemir narrated her career adventure leading to Limak Holding’s Board of Directors.  She expressed that a Boğaziçi education helped people throughout their lives.

Quoting her teacher Prof. Vedat Yerlici, Özdemir said that Boğaziçi taught its students to learn, and underlined the privilege of studying at a university that has such a perspective on education. Özdemir has worked with the United Nations and many other international organizations; she has played an important role in the “Woman Engineers of Turkey” project (Türkiye’nin Mühendis Kızları), which is supported by Boğaziçi University.  In the context of this project, Boğaziçi University’s Lifelong Learning Center offers “Social Engineering” courses to Engineering graduates with the objective of increasing their knowledge and skills in finance, management, administration, and sustainability.